The sixth game of this season’s La Liga race saw Real Madrid head to the Camp Nou for the first El Clasico of the season, against a Barcelona team which is currently going through a heavy transition process. Los Blancos took the lead in the eighth minute after Fede Valverde latched onto a nice through pass by Karim Benzema to fire past Neto, and the Catalans equalized through Ansu Fati who turned a low cross from Jordi Alba home. In a very characteristic way, Sergio Ramos won a penalty for Real which he converted himself in the 63rd, and as Barca pushed forward in search of another equalizer late on, Luka Modric kept his cool to cheat Neto before slotting into the ‘keeperless goal.

Benzema and Lionel Messi started the game as the two most advanced players for their respective teams, but neither of them played as a true striker.

Benzema mostly performed the role of a modern ‘false nine’, dropping between the lines to connect play and allow his teammates to make runs ahead. That is how the opening goal came, when the Frenchman took the ball between Barca’s deep-sitting midfielders (Sergio Busquets and Frenkie de Jong) and released Valverde behind the back of Gerard Pique. Vinicius Junior also got into some great positions on numerous occasions, but he lacked some tangible end-product in this match.

Messi played in a similar manner at first, with Fati mostly being the player to benefit from the space created in the middle. And just as Benzema did it for Valverde, Messi pulled out of the way of Fati who ran into the box to slot Alba’s cross past Thibaut Courtois for the equalizer. However, Messi’s position on the pitch changed frequently throughout the contest, together with that of the rest of Barca’s attackers. Sometimes he would appear as the No.10, with Fati moving into the striker’s role and Philippe Coutinho drifting to the left. Sometimes he moved to his old position on the right wing with Pedri dropping deeper into midfield. He was also seen a few times fighting to defend in a full-back position and showing surprising grit and determination in that role.

The Catalans are known worldwide as a team which plays extremely attacking football, and though that may have diminished somewhat since the likes of Xavi Hernandez and Andres Iniesta left, they still try to play the ‘Barcelona way’. Defending counterattacks is always an important issue for any team that plays that way, and this is where Busquets excelled in the past.

Now, however, the 32-year-old defensive midfielder seems off pace in that aspect. The ball went past him far too quickly in this game, and had Vinicius been more composed and made better decisions in the final third, or had Marco Asensio been more alert and looked to get more involved, the scoreline would likely have been bigger in the favor of the visitors.

It had to be Ramos

But when the young Real Madrid attackers can’t find a much-needed goal, the old defender steps up. Even at the age of 34, Ramos still inspires his team as a true captain. He showed true craft in winning the penalty that restored the lead for Zinedine Zidane’s team. There can be no doubt about the shirt-pull from Lenglet in that situation, but from certain angles it seemed Ramos had pushed the Barcelona man in the back, forcing him thus to grab the shirt just to stay close to Ramos and not allow him to peal away. That, however, seems not to have been taken into account by the VAR and the penalty was awarded. 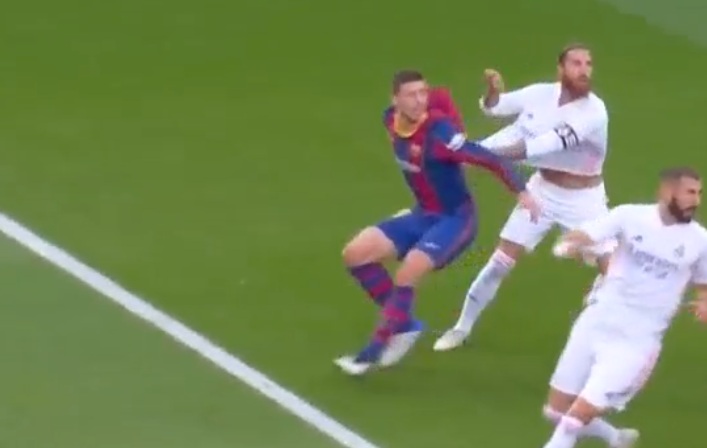 It seemed at times that Real players were actually waiting for something like that to turn the tide their way, very patiently, as if they knew it was coming. From that point on, they dropped slightly deeper and defended well, for which reward came in the form of another goal late on.

One of the main problems squad-wise for Barcelona in recent years has been the right-back spot. Both Quique Setien and Ernesto Valverde before him were often forced to use midfielder-turned-defender Sergi Roberto on the right defensive flank, neither giving too much of a chance to Nelson Semedo who left the club this summer. Even Ronald Koeman chose Roberto to start the first four league games of the season, as well as the Champions League win over Ferencvaros earlier this week, despite signing Sergino Dest from Ajax.

It should be said, though, that Dest was used on the left after Alba picked up an injury in the 1-1 draw against Sevilla on October the 4th and missed the defeat to Getafe last week, as well as the Ferencvaros thrashing.

All in all, it was an interesting decision by Koeman to start the 19-year-old USA international ahead of Roberto in the El Clasico, but the young newcomer did rather well. He seemed pretty sound defensively, and given his age and five-year contract, there is time, as well as potential, for him to develop other segments of his game and become a proper Barcelona player.

La Liga up for grabs?

Unlike Barcelona, Real still look capable of grinding out victories, even if their performances aren’t quite at the level you’d expect from the La Liga champions. The El Clasico triumph is their fourth in six league matches, and with 13 points to their name, they currently top the table. Barcelona are in 12th with a tally of seven, with a game in hand on Real and two on most of the league. The Catalans are likely to start climbing the ladder quickly and come much closer to the top, but then again so are Atletico Madrid (10th, 8pts) and Sevilla (13th, 7pts).

But the fact that both Real and Barcelona are in a transition phase with the time of the stars of the last decade approaching its end, slowly but inevitably. Soon, the likes of Vinicius, Asensio, Rodrygo, Fati, Pedri, Trincao, and other youngsters, will take their turn to shine. In the meantime, it could be the right moment for other teams to join the fight for the crown, at least for a while.