Brentford put in a fantastic effort against Liverpool at the Community Stadium on Monday evening and were rewarded with another huge victory, as well as fresh three points in their quest to go further than ever in the Premier League.

Having beaten Leicester City three days before through a pair of own-goals by Foxes’ defender Wout Faes, Liverpool suffered a bit of karma this time as the ball struck Konate’s knee after a corner and bounced into his own net in the 19th minute. Yoane Wissa, who started in the place of injured Ivan Toney, saw two goals disallowed before finally doubling his team’s lead in the 42nd. Alex Oxlade-Chamberlain pulled one back with a fine header five minutes into the second half, but Bryan Mbeumo put the contest to bed with six minutes left on the clock.

Liverpool won four Premier League games on the trot before making this trip, but it has to be said that their back line did not work too well in those games either or received sufficient protection from the midfield. This game revealed a whole new level of issues in that respect, particularly with set-pieces.

To make matters worse for the visitors, Brentford are particularly strong in that segment, with unusual patterns in place, carefully designed to cause as much problems for the opposition as possible and obviously worked on in training.

It should be said that the decision made by the VAR to let the opening goal stand is a questionable one at least, with the ball clearly hitting the wrist of Ben Mee before bouncing off Konate’s knee, but it doesn’t really justify Liverpool allowing three Brentford players to attack that ball with only Fabinho there to contest it against them. It seemed to have been a zonal marking attempt that the home side exploited very well but overloading the Brazilian midfielder on the near post.

A similar situation arose again in the 27th minute. Mbeumo whipped in another corner from the left to the near post and this time it was Christian Norgaard who got to the ball infront of Fabinho, flicking on goalwards and prompting a reflex save from Alisson Becker. The Liverpool players close by, namely Virgil van Dijk, Thiago Alcantara and Trent Alexander-Arnold, allowed themselves to get beaten to the rebound twice, but luck served them well on that occasion as Wissa started from an offside position before slamming home from less than a yard.

Note how Norgaard staying behind Tsimikas and Mee moving ahead of Konate, along with Janelt (Brentford’s No. 27) fending off Thiago (Liverpool’s No. 6) creates a space where, if an accurate cross comes in, Fabinho is left alone against potentially three opponents. 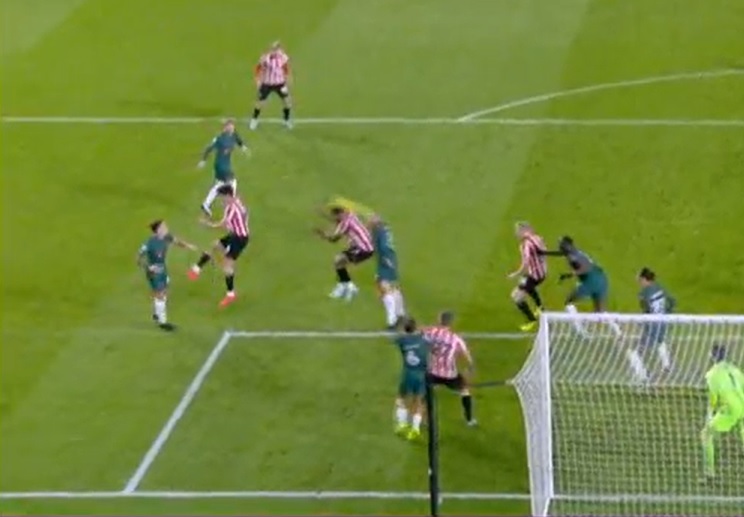 Another corner, this time hit a bit longer by Mbeumo in the 39th minute, found Wissa will all the time and space in the world, completely unmarked at seven or eight yards. The striker calmly chested it down and slammed in, but this one was ruled out as well as it picked up a deflection off Mee who was offside.

Nonetheless, as Alisson took the ensuing free-kick towards Harvey Elliott around 30 yards out, the young midfielder acted most unwisely by letting the ball through his legs. The attempted dummy backfired as Rasmussen read it well and released Mbeumo on the left with a first-touch pass. Mbeumo pulled it back for Mathias Jensen whose perfectly measured cross found Wissa on the far post, and this time his header counted as Alisson failed to stop it before it had crossed the line. Complete shambles from Liverpool, from Elliott’s lack of judgement, through Oxlade-Chamberlain’s and Tsimikas’s failure to stop the cross, down to the lack of focus from Konate and Alexander-Arnold who, between them, contributed to Wissa being allowed to head goalwards.

The point is, a serious team looking to win a match simply cannot allow every ball lobbed into the box give them so many problems, regardless of the opposition and their knack for exploiting such situations. Jurgen Klopp and his coaching staff will have to force their players to get back to some basic cross defending in training at this point, nothing else will do.

The defensive side of the game is certainly a sore spot for Liverpool at the moment. They haven’t looked this bad in that department since Van Dijk joined the club in January 2018. However, it isn’t the only issue Klopp has to deal with. There is plenty to sort out in the middle, as well as upfront.

The attacking line can perhaps be excused to a point, with players like Luis Diaz, Diogo Jota and Roberto Firmino all missing through injury and newcomer Cody Gakpo unavailable for this clash. But there are plenty of red flags when it comes to getting the ball up the pitch and trying to score which severely hamper Liverpool’s efforts repeatedly. 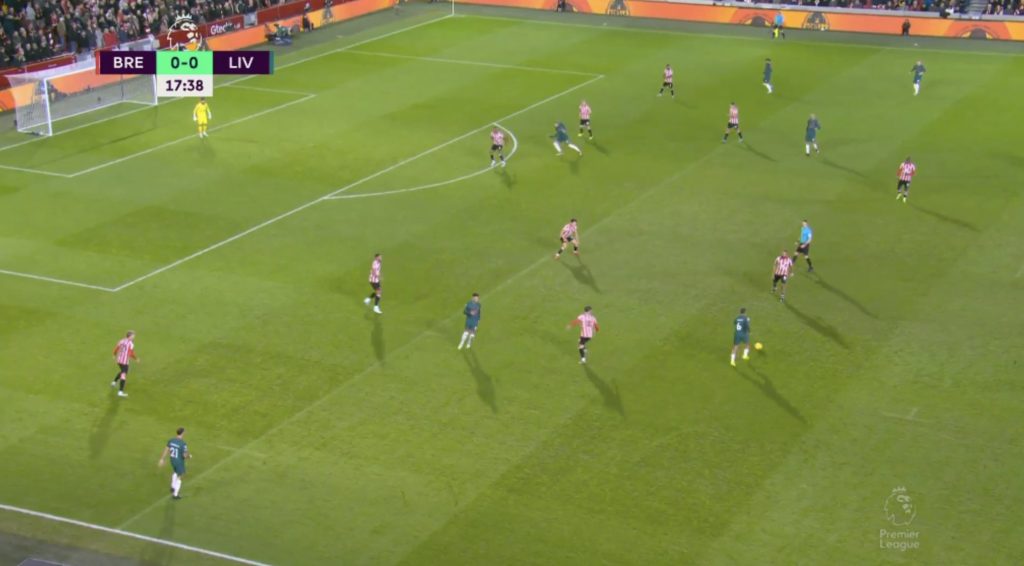 The image above is obviously a screenshot of Liverpool’s attempt to make something happen in the 18th minute, with the score still at 0-0. The ball is with Thiago Alcantara, whose ability to create is unquestionable. But while Nunez is making a run upfront and Tsimikas can perhaps can be excused as his flank simply isn’t in Thiago’s range of vision at this particular moment, Oxlade-Chamberlain, Fabinho, Mohamed Salah and Elliott are all extremely static, on their heels, not looking to get open for a pass. Their respective positions surely provide possibilities for passing combinations which could lead into a chance, but it would require them being on their toes rather than heels, and moving about to try and get a clear line of vision towards Thiago and the ball. Not one of them, apart from Nunez, does anything of the sort.

In the end, Thiago has no option but to look for Nunez with a long ball and the Uruguay international does well to bring it under control, but before he can turn goalwards, the Brentford defence quickly closes him down and crowds him out. Moments like that have been very frequent with Liverpool this season, pointing to a general lack of ideas and potentially a need for fresh blood in the squad.

Putting the outcome of this match only down to the obvious deficiencies of Liverpool would be extremely disrespectful of Brentford, of course. The home team showed perhaps one moment of sleepiness at the back which resulted in Liverpool scoring, and manager Thomas Frank will probably want to investigate why exactly Oxlade-Chamberlain was allowed a free header in that situation. Other than that, Frank’s team played a perfect game.

With only 27% of possession and a passing accuracy of under 50%, Brentford took seven shots on target from the total of 10 attempted, one more than Liverpool (six from 16). They’ve never been a team to play for possession since earning a place in the Premier League in 2021, but their resolute defending, combined with their formidable counterattacking style and original set-piece drills, have enabled them to win some mighty difficult games this season. At the start of the season, they dismantled Manchester United 4-0 at home, and more recently, they returned from the Etihad with a 1-2 victory over Premier League champions Manchester City. Now they’ve beaten Liverpool as well, having drawn against Chelsea and Tottenham Hotspur. The only defeat at home they’ve suffered so far this season was against league leaders Arsenal back in September.

Brentford are currently seventh in the Premier League table, though with more matches played than any team close by. They might’ve been considered among the teams happy to avoid the relegation battle until recently, but the eyes, ears and hopes of Frank and his players will have turned away from that talk and towards Europe by now.

The Bees could probably end up with nine points from the next three league matches. After they play West Ham in the FA Cup on Sunday, they’ll welcome Bournemouth, travel to Leeds and play host to Southampton, three opponents from the lower half of the table.

As for Liverpool, this game showed up some very good reasons why they are so very far from where they want to be right now, and why they don’t look likely to finish inside the top four. In many ways, this is the worst season they’ve had since Klopp took charge of the team in 2015.

At the moment, the Merseysiders are sixth with 28 points, four less than Manchester United in fourth and on top of that, United have a game in hand on both them and Spurs in fifth. There’s obviously a long way to go yet, but Liverpool seem far too quick to waste any benefits they might reap through fine results, and the most damning aspect of all is the fact that they simply don’t look like the team that used to beat any opposition, including the best ones out there, into submission through intensity.

At the moment, these players are being beaten by what was once their own main weapon.