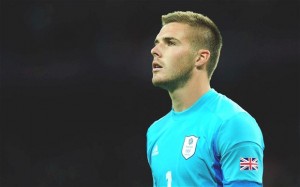 Birmingham City boss Lee Clark has insisted that England international goalkeeper Jack Butland is not for sale amid reports that Liverpool are set to make a £7.5 million move for the Blues shot-stopper, ESPN Soccernet understands.

In addition, Clark revealed that 18-year-old starlet Nathan Redmond will stay at Birmingham City for the foreseeable future.

“We’ve got no intentions of letting the young players go,” Clark said. “The likes of Jack Butland and Nathan Redmond are the future of the club.

“If we were to cash in on them now, we’d be doing ourselves a disservice. Once they’ve got another year or two of experience, they’ll be worth huge amounts of money.”

Butland earned his first international cap against Italy on Wednesday, 15 August, when he became England’s youngest goalkeeper international of all-time.

The 19-year-old shot-stopper spent last season on loan at League Two side Cheltenham Town, starting 24 league matches for the Robins while tallying a 12-5-7 record.

According to Sky Sports, Everton have beaten Arsenal in the race for Olympiakos forward Kevin Mirallas.

“They are two big clubs in the Premier League, but for me it is more important to play every week. It is better for me a little bit at Everton. They are a good team and it is a good opportunity because Marouane Fellaini plays at Everton who is my friend, but I don’t know.”

Mirallas, 24, was the Greek Superleague’s top scorer last season after bagging 20 goals in 25 games for Olympiakos. He is capable of playing on either flank or as a centre-forward.

The departure of Tim Cahill, who left the Toffees in favour of MLS side New York Red Bulls earlier this summer, almost guarantees Mirallas first-team football at Goodison Park.