Can the Beautiful Game of Football Pave the Way to Peace?

The most unlikely team on earth just announced their roster at darfurunited.com

Darfur United consists of refugees from UNHCR camps on the Chad-Sudan border. With minimum support, they have about six weeks to pull off a miracle. They are preparing for the Viva World Cup, to be held in Iraqi Kurdistan this June. Many of the teams admitted to the tournament never get a chance at the Viva’s Nelson Mandela Trophy due to funding or political issues.

The Viva Cup was set up in 2006 for those who are excluded by definition or resources from FIFA. The idea is to demonstrate that marginalized peoples can exist through sports competition. Darfur United continues pro level practices in the excruciating heat of Camp Djabal with no guarantee that the means will appear for them to make their journey. 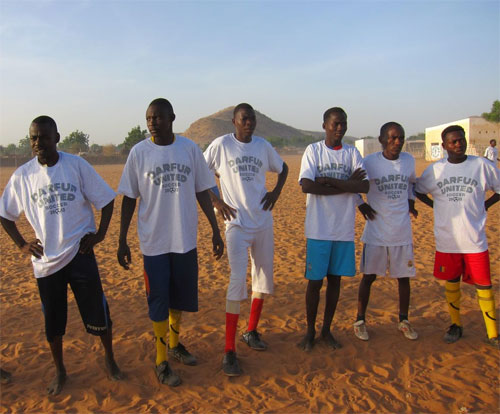 The team is made up of determined players who fled their homes as young children. They survived “scorched earth” attacks on their villages in Sudan nine years ago and have been living in refugee camps since then. Representing over 280,000 Darfur refugees, these top players from different tribes and twelve different camps have united to restore the dignity of their people on the pitch.

When the Viva Cup acceptance was announced one refugee exclaimed, “Now we are part of the world.” It was a rare moment of jubilation for the camps.

Here is what volunteer Coach Brian Cleveland had to say about the team:

“I couldn’t imagine how hard it must be for the players to leave their families and obligations for two months so they can make Darfur United a reality. Now that is true sacrifice. 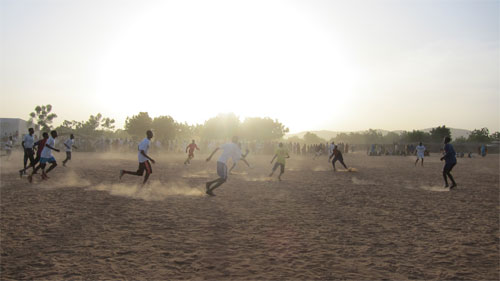 “Some of our guys have wives and children back at their camps. They may be the bread winner that supports the family. Most of our players are teachers back at their camps. Most already have close to nothing, other than the family members who weren’t lost or scattered in the process of fleeing their homeland. They’re willing to sacrifice all of that to give the people of Darfur something to be proud of, someone to root for, and above all else hope for the first time since 2003.

“These 15 men will represent all of the Darfuri people who have been displaced from their homes and utterly ignored by their own government, and be the platform to tell the story of Darfur on an international stage. Can a soccer team help pave the way to peace? It’s been done before. A lot of people just see it as a game, but this game has changed history time and time again. That’s what makes it so beautiful.”

Darfur United from iActivism on Vimeo.