David Beckham is right to stay in America 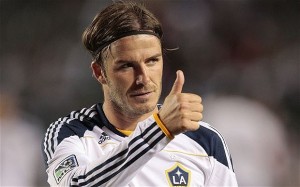 His previously contract with the American side expired last December and there was speculation he could be heading back to European football in the winter transfer window.

Beckham said in a statement: “This was an important decision for me. I had many offers from clubs from around the world, however, I’m still passionate about playing in America and winning trophies with the Galaxy.”

Love he or loathe him you have to give him credit for doing what’s best for his family. Beckham’s family has spent the last five years of their lives in the States and if he moved he would have to uproot them.

America has obviously provided Beckham and his family with a good lifestyle. He has found in LA a good place to raise his children.

The 36 year-old had lots of options when his Galaxy contract expired. There was talk of a return to the Premier League with Tottenham boss Harry Redknapp believed to be willing to sign the former-Manchester United ace.

Oil-rich French club PSG were interested in signing Beckham and were believed to be ready to offer the midfielder a lucrative deal to take him to the French capital.

The new PSG owners are currently embarking on the start of a project similar to the one at Manchester City. They want the club from the French capital to be the biggest in Europe but first they need to raise the profile of the club.

David Beckham is one of the most high-profile footballers in the game. Wherever he goes he takes a big media presence with him. PSG knew that if they signed David Beckham the profile of the club would instantly hit a new high.

David Beckham is without doubt one of the richest living footballers, yet he could have made far more money by leaving the MLS than staying. If he had moved to Paris he would have definitely earned  more than in the MLS. Beckham isn’t exactly on a pittance in LA but his wage packet would have been even larger in France.

I suppose there is only so much money you can spend and life isn’t all about money.  A lot of footballers are greedy and just chase the better deal. However this a rare case of a player staying put for other reasons.

At 36 years of age David Beckham is in the twilight of his career. Even when he moved to the States I believe he thought his powers were starting to wane. He has had to adapt his game in the last few years because of natural physical decline.

David Beckham is very fit for his age but even he is liable to feel the effects of age. He can’t say he is the same player as he was when he was at his peak.
Right

David Beckham still has a lot to give football but maybe he isn’t quite good enough for the Premier League anymore. I think the former-England international has probably made the best decision for everybody in staying in LA.

He can carry on playing football, his children don’t have to be uprooted and he has a wonderful lifestyle. Why would he want to move anywhere else?

Has David Beckham made the right decision by staying in the MLS?

Yes. It’s important we have stars like Becks in MLS, even if they’re not in their prime. If the average American’s knowledge of real football is one player deep, more likely than not, it’s Beckham.