De Gea would be an ideal signing for Red Devils 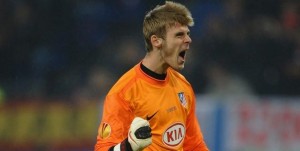 Atletico Madrid keeper David De Gea is currently one of the hottest properties in European football and if reports are to be believed he could be heading for the Premier League with Manchester United.

The 19 year-old was only brought into the Atletico side in January and made himself a hero with his performances in the Europa League, as his side went on to win the competition.

At just 19 he is already being talked about as a potential world-class keeper of the future. His maturity and the fact that he has moved up from the junior sides to the senior side with such ease has showed that he not only has talent but also the mental strength to become a top player.

Spain is currently a hotbed of keepers. Real Madrid keeper Iker Casillas is currently first choice then there is Barca’s Victor Valdes and Liverpool keeper Pepe Reina both trying to pry that number one jersey off Casillas’ back.

De Gea and club teammate Sergio Asenjo are the next generation of keepers coming through the Spanish youth ranks ready to replace the old generation. Both are highly-rated and it says a lot about young De Gea that he is currently keeping the highly-rated Asenjo out of the first team.

His performances have brought him to the attention of the likes of Barcelona and Manchester United. United manager Sir Alex Ferguson watched the youngster in action in Atletico’s recent 1-1 draw with Valencia.

The youngster allegedly came close to joining Wigan Athletic for just £1.5million less than 18 months ago but he decided to stay at Atletico and take his chances of making it as number one at the Vicente Calderon. His decision seems like a very good one now.

Ferguson doesn’t usually check out players himself unless he rates them really highly. He knows that he must try to find a replacement for veteran Dutch keeper Edwin Van Der Sar. The former-Juventus keeper recently turned 40 and it’s rumoured that he will retire next summer.

Even if Van Der Sar does continue into next season then United will eventually have to find a keeper capable of replacing the Dutchman. He will be a hard man to replace, as he is usually reliable and consistent between the sticks.

The question is will Sir Alex take the risk of replacing Van Der Sar with a keeper half the 40 year-olds age. I spoke of De Gea’s maturity earlier on but Fergie would still be taking a big risk on having such a young keeper as his number one.

It’s happened at big clubs in the past, a good example being the aforementioned Iker Casillas becoming Real Madrid number one at a tender age.

Keepers are often at their best in their late-20’s early thirties but De Gea could be the exception to that rule. He has some similarities to Van Der Sar in his physique and like Van Der Sar he has a good command of his area.

Manchester United may face disappointment in their pursuit of the youngster this summer as he has told press he wants to stay with Atletico. He recently told press:  “The important thing is that I have a contract here and I’m an Atletico player until 2013. That’s what matters,”

“The truth is that everything is turning out well here, and I’m with my family and my friends, which is what I need. I think that is very important.”

“I have a contract until 2013, and when the year is out we’ll see if things are going well, and those who have to talk [about an extension] will talk.”

Atletico are hoping for the youngster to stay at the club because of what his potential promises. However the reality is that Atletico probably couldn’t afford to turn down a massive offer for the youngster.

I have heard from a Spanish football insider that the club rate him in the £18 million bracket. If the side from the capital receive an offer in that region I can see the Spanish under-21 being sold. He could prove a very shrewd signing for Manchester United.

Will David De Gea sign for Manchester United this summer?