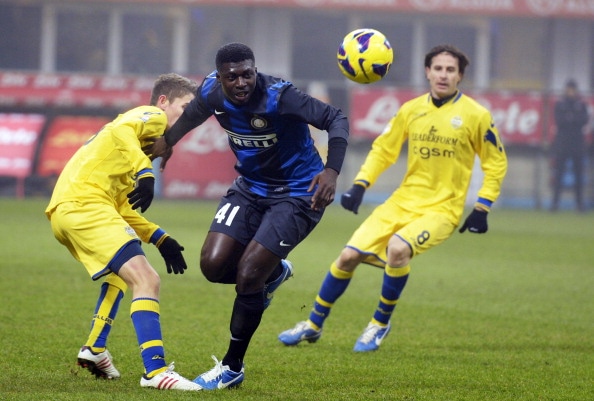 Duncan, 20, is believed to be one of Ghana’s rising stars and has been compared to Chelsea standout Michael Essien.

The Ghana international, who spent the second half of the 2012/13 campaign on loan at A.S. Livorno Calcio in Serie B, is also reportedly attracting interest from the aforementioned Livorno, Sampdoria and Serie A newcomers Sassuolo.

“To be honest, though, nothing has been done and Inter will have a big say if I leave Inter or not.

“Fans compare me with Essien and if I can have half of his career I will be very happy.

“He is the best midfielder ever in Ghana. He played box-to-box, could break play up and could dictate play at the same time.”

The highly-rated 20-year-old made four appearances for the Nerazzurri under Andrea Stramaccioni prior to joining Livorno on loan for the remainder of the season on 24 January 2013.

While on loan at Livorno, Duncan scored three goals, was cautioned six times and sent off twice in 22 appearances at the Stadio Armando Picchi.

Borussia Monchengladbach have completed the signing of Dynamo Kiev forward Raffael on a four-year deal for an undisclosed fee, pending a medical, Sky Sports reports.

Raffael, 28, will rejoin his young brother Ronny, who plays for Hertha BSC, in the Bundesliga next season.

The 28-year-old, who played for Hertha BSC from 2008-12, joined Ukrainian Premier League giants Dynamo Kiev in the summer of 2012 before agreeing to a loan deal at FC Schalke 04 last season.

“We are getting another versatile and technically strong player for our attack,” said BM director of sport Max Eberl.

“This transfer was not easy to complete which makes us all the more delighted that it has now come off.”

Tiene, 31, will be staying in France despite reported interest from Premier League side Fulham.

The Cottagers, who have already brought in Maarten Stekelenburg from AS Roma and Fernando Amorebieta from Athletic Bilbao this summer, could use an insurance policy at left-back — in addition to Matthew Briggs — after the inconsistent form of Norway international John Arne Riise last season.

“I am leaving PSG because they do not want me,” said the Côte d’Ivoire international. “It was a good experience to leave a team who won the league.

“Fulham has been linked with me, but never went in for me which they should have done. I have always wanted to play in the Premier League.”

He added: “Montpellier will be fantastic for me. I will have more opportunities there.”