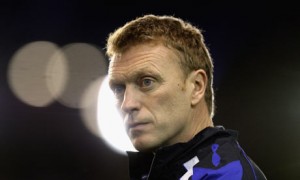 As an Everton fan you expect to be put through the mill by the team. We can never do anything the simple way.

Every season we start the season in poor form, recover and finish in good form. This season however I’m not so sure the form will recover.

As I watched Everton draw 0-0 with a poor Wigan side all I could feel was frustration.

It was a similar story to a lot of Everton’s season so far. We dominated possession and had chances but couldn’t find the killer touch and far too many times we overplayed.

The side are obviously lacking confidence and that confidence will only come with a win, no matter how that win comes. However we are now without a victory for seven Premier League games. That’s a poor run of form for a team expected by many to challenge for a European place this season.

In current form Everton are more likely to finish in the bottom six of the Premier League than the top six. It really is a worrying time to be an Evertonian.

The problem for Everton is taking the chances we create, which at times is a lot. The strikers are struggling to find their form and between them have scored only three Premier League goals this season. Yesterday David Moyes started with Louis Saha up front as the lone striker.

He hasn’t been getting into the positions to score but today the chance he did get was well saved by Wigan Ali Al Habsi. He is starting to look like his time in the Premier League is coming to an end.

I believe Moyes should have started with Jermaine Beckford from the start against Wigan after scoring the equaliser in the 1-1 draw at Chelsea. Beckford is a goalscorer but is very much a confidence player. He was unlucky not to score yesterday, having a goal ruled out for offside.

He has made a giant leap from League One to the Premier League but he is currently offering more of a goal threat than the aging Saha. He deserves a chance and a run in the team to adapt to life in the Premier League. We will never know if he’s good enough if he isn’t given the chance?

The other recognised striker in the squad Yakubu has looked out of sorts since returning from a cruciate ligament injury, he just hasn’t been the same player. He was never blessed with great pace but he now seems to be slower than ever.

The 28 year-old has been criticised for his apparently lethargy on the pitch but his style has always got him goals. He has frequently hit the 20 goals a season mark in his career and has a good physical presence.

Just when he looked to be getting close to his best form again David Moyes decided drop him from the team and reinstate Saha as the lone striker. Yesterday Moyes decided to leave him on the bench and not even give him a chance when we were desperate for a goal.

One player who has been scoring for Everton this season is attacking midfielder Tim Cahill. The Australian international has scored eight goals this season. Unfortunately for us in January he will go away with Australia to the Asian Cup. If somebody doesn’t start to contribute with goals soon we could be in real trouble.

In January Everton will have the chance to strengthen the squad. However David Moyes has been told he will have no funds to spend on new players. That will mean having to sell to buy and there are a few players who are prime candidates for the exit door.

Dutch defender/midfielder Johnny Heitinga has looked disinterested and unhappy at the club in recent months. He has been linked with a move to Germany and he hasn’t distanced himself from those reports.

Midfielder Steven Pienaar could also go, as his contract runs out next summer. He is currently keeping his options open. Everton wouldn’t receive a big fee and it seems that David Moyes would rather keep him until the summer and lose him for nothing.

Youngster Victor Anichebe’s contract also expires next summer and according to reports he has rejected an offer of a new contract. He could be sold to raise a small amount of money. Whatever funds that Moyes raises from sales must be reinvested into the signing of a striker.

Everton’s campaign is very much mirroring last season’s. About this time last season though Everton started to improve and went on to lose just two games out of the last 20. There is still plenty of time for that to happen.

The form must improve very soon or this season could end in a disaster. I very much doubt that we will be relegated but a bottom half finish would still be a very disappointing result.

What position in the Premier League will Everton finish?

I’m sure the Toffees will get back to real business after Christmas, David. I’m thinking they’ll be somewhere in the top half of the table. Donovan should return next month, and this time he should stay.