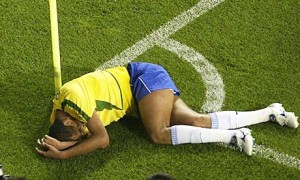 What started as an attempt to win an unfair advantage over an opponent has become a kind of plague over the years but this piece will show you that soccer dives can provoke more than just controversy. When you finish off reading the article (and watching the videos), you will have either found a new appreciation for divers or you will condemn them even more, but we can guarantee you’ll be laughing your ass off in the meantime.

Besides being regarded as one of the best players of his time, Rivaldo was a kind of an artist when it came to diving and he exhibited part of his repertoire in the World Cup 2002 group game between Brazil and Turkey. Turkey player Hakan Unsal did aim the ball towards the Brazilian but hit him in the knee rather than in the face as Rivaldo tried to suggest. Unsal was, nevertheless, expelled by the referee, while Rivaldo went on to even score the winning goal in the dying moments of the match. He was subsequently fined for fooling the referee but the result was not overturned.

5.) Drogba vs Lehman (Chelsea against Arsenal)

Both Didier Drogba and Jens Lehman were more than famous for their diving skills and this incident hardly surprised anyone. We could see both players show what they are best at (in their own special style of course), apart from scoring and defending goals for their respective teams that is. Both Drogba and Lehman boast more than few incidents similar to this one in their resumes but this one was special as in included them both.

Stephen Taylor attracted a lot of attention due to his ball-handling skills and this was one of those special moments that could have won him an Academy Award for Best Performance if only the referee was not so indifferent to his acting skills. After defending an empty net with his hand, Taylor fell down as he was shot trying to show that the ball had hit the chest instead, but the ref just wouldn’t play along and he showed him the marching orders.

Milan keeper Dida had the chance to feel the atmosphere at Parkhead at first hand after Celtic scored a goal and we could all see he was surprised. When one of the home fans stroked him on the face, Dida first thought he should chase him but then remembered the easiest thing to do was to fake an injury. You have to forgive him for being a bit slow, he is a keeper after all.

This is surely one of the most blatant dives you will have ever seen and it was performed by one of the best, Alberto Gilardino. Not only did he dive four or five meters after the place where he was supposedly clipped by Celtic defender but he had the decency to complain after receiving an instant booking from the referee. Maybe in some other country this would be considered a disgrace, but in Italy, this is basically a part of their football culture.

German Bundesliga is known as one of the fairest league you will ever see but an event from Germany, nevertheless, tops our list. It was clearly a one-off incident but we just couldn’t get past it. Koln’s Albert Streit committed foul on his opponent right in front Duisburg coach Norbert Meier, who seems to have tried to lecture the Koln player. The pair collided with both Streit and Meier faking an injury and falling on the grass. The synchronization could have been a bit better but they, nonetheless, deserve an A for effort.

What a cheat that bastard Drogba is and Rooney is just as bad.