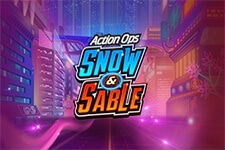 Become one of the superheroes fighting crime on the streets of the future in the thrilling Action Ops: Snow and Sable slot!

About Action Ops Snow and Sable

This 5-reel, 3-row slot is configured to merely 10 paylines, yet it features two Substituting and Expanding Wilds, Scatter pays and a rewarding free spins round, that will have you coming back for more in efforts to get your hands on a top payout of 100,000 coins.

Once the game loads, open the Bet panel to choose a coin size ranging from $0.01 to $1 and select from 1 to 10 coins to place per line. Adjusting these values will result in total bets spanning between $0.10 and $100 per spin.

Fly into the city of the future and benefit from four high-value symbols represented by super cool gadgets delivering from 600 to 2,500 coins when 5 of a kind appear on a payline. As usual, low-win icons are depicted as playing card symbols J through A awarding 250 and 300 coins for 5 of a kind. The game boasts two Wilds in the form of two stunning cyborg ladies named Snow and Sable. Both can contribute to a win by replacing all other symbols except for Scatter and each other. Landing a win in which both Wilds are present grants 5,000 coins while obtaining a combo comprising of 5 matching Wilds enables a reward of 10,000 coins. Given values are based on the maximum bet.

The Snow&Sable Logo represents Scatter triggering 10, 15 and 20 free spins once 3, 4 or 5 of them appear on the grid respectively. Scatter will additionally reward you with 2x, 10x or 100x the total bet for landing 3, 4 and 5 respectively. During this feature, Snow and Sable appear expanded on the reels 1 and 5 thus boosting your winning chances. If 2 or 3 Scatters hit the reels during the feature, they grant 5 and 10 additional free spins respectively.

The game is medium variance, played with a theoretical Return to Player of 96.03%.

"Prizes landing during the main game prove to be quite satisfying, yet the greatest win potential resides within the Free Spins feature where Snow and Sable give their best to bring you massive prizes. The gameplay is fairly simple but quite satisfying due to a top-notch design that contributes to an enjoyable playing experience."