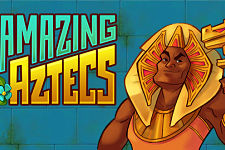 “There’s a lot to be said about the Aztecs that’s both good and bad, but nobody can deny that their culture and history continues to impact South America to this day in many ways. Despite the great cultural heritage, the Microgaming’s offering feels a little underwhelming.”

We know not everyone is a history buff, but for us, the appeal of history was always in learning just how different the world could have turned out if the situation was even slightly different. Even the great men and women of history had to count on luck here and there for their success. Sadly, the Aztecs did not have such luck, but they can at least boast the fact they held a strong empire before their luck ran out.

Launched in May 2018, Amazing Aztecs is a 5-reel, 3-row video slot with 243 ways to win. The game has only a single special feature you can activate and that is an opportunity to expand your winning combination with a Mega Symbol which can extend an already good win into something absolutely amazing if things line up right.

If there’s one constant that carried from ancient times of the Aztecs to even today, it’s the importance of making sure you’re managing your money properly. The coin denomination goes from $0.10 up to $100 per spin, and the wager flows in much the same way – without set paylines, there’s not any difference between the two, which simplifies the bet for anyone who doesn’t want to translate coins to cash and vice versa.

There are several different symbols you can find on the playing field. There are a few lower paying ones, taking different geometric shapes and colours – so you will find a blue triangle, a green block, a purple flower, a yellow orchid and an orange square, all with a precious gemstone hidden in the middle. On top of this, you will find four different Aztecs, after which the game carries its title. Finally, there’s a symbol which is simply the title’s logo, which we thought would be Wild – but it was simply another regular icon like any other, which we found disappointing.

There are no specific symbols which activate special features – in fact, there aren’t even any Wilds or Scatters to really uncover. Instead, after every win, the slot will randomly select between the three symbols on the third reel. If it lands on an icon that is part of the winning combination, it triggers the Giant Re-Spin, which can create a 2x2, 3x3 or 4x4 block that will land on the reels to expand the already existing win with something even better.

"Average seemed to be the key thing going through our minds as we were playing this Microgaming release. The visuals are good and there’s some promise to it, but it is very much so a one trick pony. With another special feature, it could have easily gotten a better score, as right now, it just feels like there’s a key part of the title currently missing when we play it."