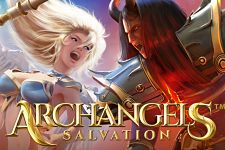 “A final struggle between Heaven and Hell has been a popular idea that’s been adapted many times over in all media, and NetEnt have done a good job bringing it to life.”

When two sides are diametrically opposed to one another, it’s only a matter of time before something causes conflict to burst into flames. Polar opposites can rarely stand one another, and so war between Heaven and Hell seems like a logical concept – it’s simply inevitable. The NetEnt’s take on things seems ambitious, with two fully animated characters on the backdrop performing their animations, while the real clash is in the middle of the screen, where the reels sit. You might think this is the sort of conflict that would force you to pick a side – but no matter who loses, you walk home a winner.

Launched in April 2018, Archangels: Salvation is a 6-reel 12-row video slot with 100 fixed paylines. Despite the massive reels and the verticality they bring, NetEnt doesn’t do much with them apart from attaching one of its special features into the top and bottom of the reels respectively. As such, there’s no reason to be intimidated by the massive amount of paylines.

Before you start putting on your armour and declaring allegiance, pause for a moment and see which side is willing to pay more for your services. The coin denomination ranges from $0.01 to $0.50, while the bet goes from $0.40 up to $200 per spin, allowing both the humblest gamblers to potentially win a jackpot and boost their cash situation, while giving high rollers a chance to play around with massive amounts of money.

Despite the massive reels, there aren’t many symbols. You have poker card icons, some angelic and demonic icons, and finally, the devil and angel you see on the sides of the reels also occupy the reels as well. Those two in particular are tall icons, and can stretch across multiple rows at once. On top of that, the visuals are really well done, particularly the animations.

Wilds can appear as 2x2 blocks or singleton Wilds which take up only one space. They’re the amalgamation of a golden lion and a black drake. It can replace any symbol except for the Scatter. Scatters are a giant S letter on top of a solid purple background, encased in gold. Three or more stacked Scatters rewards free spins.

At the top and bottom of the reels, there are two separate hot spots, which activate the Heaven and Hell features, respectively. They only activate if a Wild ends up in either of the two hot spots, and during free spins, the area is increased to include three rows, up from two. If a Wild partially lands in either hot zone, it still activates a feature, just partially.

"We were quite impressed, overall. We don’t have that many big faults to nitpick on. All we can tell you is to go out and play it for yourself. We wish you luck with the jackpots!"