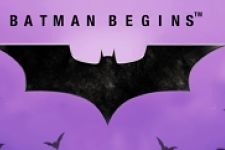 "Save Gotham City from the League of Shadows with Batman Begins played across five stages with unique Wilds introduced with each stage."

Playtech is widely acclaimed for their branded slot titles and in 2018 they have come up with the one based on the 2005 superhero film by Christopher Nolan. It is Batman Begins starring Christian Bale and it tells the story of Bruce Wayne starting with the death of his parents to his becoming Batman. In the movie, Batman fights Ra's al Ghul and the Scarecrow to stop them in plunging Gotham City into chaos. With the Playtech slot machine you can do the same and save Gotham City from the League of Shadows.

Once you launch the game, you will see the reels set against a snowy backdrop with Ra's temple and snow falling down. The reels are home to icons portrayed as Batman himself, Ra’s al Ghul, Dr. Jonathan Crane, Ducard, Scarecrow, Commissioner Gordon and Bruce Wayne. Other positions are covered with playing card icons from 9s through As.

Though the game does not offer a free spins feature, each of the five stages boasts innovative bonus features that will enhance your odds of winning. They include Wilds that will expand and shift in different directions on the reels to help you complete multiple winning combinations at once. In addition, you can win one of four progressive jackpots.

The Batman Begins slot uses 5 reels and 20 fixed paylines. Before you set the reels in motion, set your stake by choosing a line bet. Your total wager can be anywhere from $0.20 up to $200 per spin, which is suitable for all kinds of players.

The game starts at the Temple stage during which you can benefit from the Blooming Flower Wild that expands one position in four diagonal directions to cover up to five positions at once. In the Wayne Manor stage, Petrol Wilds engulf the reels and turn all the symbols on their path into Wilds. During the Batcave stage, Batmobile Wilds award respins and move one position to the left until they disappear from the reels. The Arkham Asylum stage benefits from Bat-Signal Wilds turning random symbols into Wilds and awarding a multiplier of up to 50x. Last but not least, the Monorail stage introduces Microwave Wild which turns random symbols into the most lucrative symbol on the grid.

There's plenty going on in the Playtech release, but once you start playing the game, you will easily figure it out. Keep an eye on the hotspot in the centre of the reels and the meter above them to move from one stage to another. When the Batman icon lands on the hotspot, it will expand to cover the reels completely and help you win bigger payouts. At any point of the game, you can trigger the Jackpot game and win one of four progressive jackpots.

"Batman Begins may not have a free spins feature to offer, but its structure and stages coming equipped with different Wilds will keep you spinning the reels for a long time. In terms of aesthetics, this is a typical Playtech affair, so if you liked their previous DC Comics branded titles, you will love this one as well."