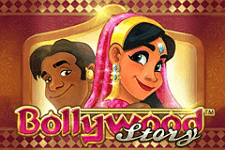 “For a lot of people, Bollywood has become relatively popular as a source of over the top movies that defy all physics and logic to tell a story. But with a country as large as India, Bollywood produces a lot more than confusing action movies.”

Indeed, when we first saw the title, we were perhaps hoping for one of those logic defying movie types that would no doubt translate into a hilarious slot. For better or worse, however, NetEnt decided to go with something more down to earth, and a quick glance will tell you this is a tale of a forbidden romance. Grumpy parents, a young man and woman in love, and what will no doubt end up a TV series that’s over five hundred episodes long in which half the episode is spent zooming into characters staring while dramatic music plays.

Originally launched in December 2015, Bollywood Story offering a 5-reel, 3-row playing field with 9 fixed paylines saw its revamped version in 2018. As for features, the options are relatively simple. You have a traditional free spins bonus activated through Scatters, and a more interesting take on Wilds than restricting them to one single symbol that can appear.

We’re going to put a spoiler alert on this story and say that the family will eventually resolve their issues and our young couple will get married. And if there’s one thing you should take away from this all, it’s the importance of balancing your budget so you too can have an extravagant over the top Indian wedding. Or spend it all on slots like we do! The coin denomination goes from $0.01 up to $1.00, while the wager itself goes from $0.09 up to $9 per spin. We can’t imagine it will impress a lot of high rollers with these numbers, but more casual gamblers don’t have to worry about breaking their bank.

Among the list of game icons, you will find an angry older woman, an angry older man, a smiling young man, and a smiling young woman, alongside the game’s logo and several playing card symbols, such as 10, J, Q, K and A, which were sadly not stylized to fit the look of the rest of the icons. While Wilds are present, they aren’t locked to one particular symbol, and as such, don’t appear on the reels by themselves. Scatters are represented by a gorgeous blue broche.

The first special feature we will talk about are Wilds as they’re a more interesting take on things than usual. Rather than having a singular Wild symbol, we have floating Wilds, which change positions on each spin, guaranteeing you have at least two at any given time. During normal gameplay, between two to four floating Wilds can appear on the playing field, while during free spins, that number goes up to three to six. They will only transform into Wilds if they’re part of a winning combination.

The free spins, by proxy, aren’t nearly as interesting. Winning three, four or five Scatters will reward you with ten, twenty or thirty free spins, respectively. It is possible to retrigger the feature. Overall, a rather standard take, but the boost to Floating Wilds is a nice touch.

"We have to admit, we never expected to find ourselves reviewing a game centering around Bollywood. Regardless, hats off to NetEnt for producing a rather fun to play title, even if the pays could be a little better."