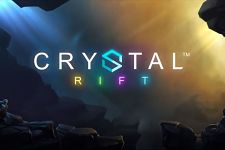 “There are rich treasures lying hidden underneath the surface of the Earth... Be the one who finds them!”

Get ready for a thrilling underground adventure with Microgaming's Crystal Rift, which will take players mining for a jackpot. The game launched in November 2018 features stunning visuals and engaging game mechanics, while at the same time its hidden riches appeal to a wide audience of players.

Crystal Rift is a 5-reel 3-row video slot with 25 fixed paylines with Wild Grids being the feature players should be on a lookout for. This feature is activated after three successive cascade wins and has four different levels. This release promises not only plenty of fun, but it can also handsomely reward those with enough luck.

To adjust their stake, players only need to choose the appropriate coin denomination, which ranges from $0.01 to $2. Depending on this, the wager itself will be anywhere from a mere $0.25 to $50 per spin.

The game looks stunning. Players are lured into a dark and mysterious cavern where the reels are located containing differently coloured rock symbols. The one you'll want to see on the reels more often is the amber rock, which can pay up to 40x the wager for 5 across a payline. A shimmering white crystal is the game's Wild, and as usual, it can substitute for all other icons, awarding a hefty payout worth 40x your wager for 5 of a kind.

Players get a cascade after a winning spin, which means all icons that formed the win get removed from the reels, while a new set of symbols replaces them. This will continue as long as new winning combinations are formed. This is the Bonus Falls feature.

Before a spin, a Wild Grid is chosen, and if a player succeeds in landing three cascade wins in a row, they will unlock the Wild Grid feature. This feature has four different levels – Basic, Super, Mega and Insane. The latter awards 8 extra Wilds, resulting in very lucrative combinations.

Unfortunately, Crystal Rift doesn't offer any traditional bonus rounds, although the Cascading Reels game engine and Wild Grids will deliver enough action, while the maximum win of 1,000x the bet definitely sounds like a good reason to check this title out.

This is a medium variance title, with an average return to player of 96%.

"First of all, Crystal Rift is a visually superb game, with an immersive graphics and even more engaging game engine. It definitely has the potential of awarding huge prizes, although many won't like the fact it has no traditional bonus features on offer. If you're willing to overlook this, you'll still be guaranteed a good time."

“Find immense riches waiting at the bottom of the sea in this exciting release from NetEnt.”