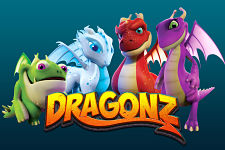 “Microgaming proudly presents Dragonz, an action-packed adventure that offers the chance to win up to $107,500.”

Microgaming has an epic adventure in hand for all those players that seek excitement, lots of fun, and a chance to win huge payouts. Launched back in November, Dragonz will keep you seated for hours, bringing unique and powerful features with Flint, Frost, Gobble and Switch, the four friendly beasts.

This five-reel video slot offers 243 different ways to win, but most importantly, has lots of lucrative features waiting those lucky enough to get the most out of them and win up to $107,500.

In terms of graphics, this Microgaming release offers neat 3D animations, but doesn’t quite showcase the latest technologies. Background scenery could have been a bit more interesting, which can also be said for the game’s soundtrack. But, as said, it’s the game’s features that bring action to reels.

Pay special attention to our four Dragonz, since their mayhems may fill your pockets with money.

The coin value ranges from $0.01 to $0.05, while the wager itself can be anywhere from $0.40 and $30 per spin, which should suit the needs of both penny punters and high rollers.

This is a high volatility game, which means you won’t get paid often, but when you do, it’ll be worth waiting for, while RTP is 96.3%.

Low-value symbols are playing cards, while the game’s main protagonists are also the top-paying symbols.

The four dragons bring different perks and benefits, unique to their nature. All of them give 10 extra spins, when landed at least three of a kind, but with a personal touch.

Flint, the red dragon, brings Flaming Wilds, shooting them on the reels each time he fires. Switch, the purple dragon, brings Stashed Wilds. He stores non-winning Wilds and when 3 or more are collected, they get randomly distributed on the reels, giving a guaranteed win. Free spins continue until all Wilds get awarded.

The Wild symbol substitutes for all others except Scatter and has a special feature of its own, called the Wild Deal. Any non-winning spin with Wild on the reel 3 deals extra Wilds onto the other reel for a guaranteed win, replacing any symbol.

You can also trigger the Free Spins feature by landing at least 3 Scatters.

Finally, there is another feature worth mentioning called the Player Choice Progress Bar. The bar is filled when a feature is activated, and the players get to choose a feature on the 12th trigger.

"Dragonz is definitely a title worth playing since it offers lots of features, but mainly because its high variance will be appealing to a large number of players. So check it out, you won’t regret it."