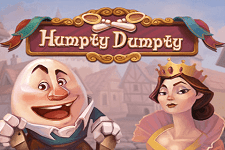 "Humpty Dumpty may have had a great fall, but you can put him together and he will reward you with abundance."

One of the most popular nursery rhymes served as inspiration to Push Gaming, the software developer behind the slot Humpty Dumpty. The game is available at Microgaming-powered casinos and you can enjoy it across all devices.

You must have met the egg with a human face if you have read the novel Through the Looking Glass by Lewis Carroll. It is one of the appearances of the character that looks clumsy and according to the song, falls off the wall that "all the king's horses and all the king's men" could not put him together again.

In the Push Gaming's 2017 release, the reels are set against a backdrop depicted as a medieval town. The reels look as if made of wood and they are home to the symbols depicted as the king, queen, knight, horse and maiden while the rest of positions are populated with playing card icons designed to match the theme of the game. A cheerful melody accompanies the crisp visuals.

Humpty Dumpty is played at 5 reels and 25 paylines. You can wager from $0.25 up to £100 per spin, just pick a value that suits you bets. To win a prize you have to land at least 3 identical symbols.

Use the Autoplay feature to activate up to 100 automatic spins which can be stopped at the loss and win limits you have previously set.

Wild is depicted as crossed spoons and whenever it lands on the reels it triggers a respin thanks to the Falling Wilds Respin feature. Wild will move one position downwards while all other reels will be locked during the respin. The feature lasts as long as Wild is present on the reels.

Humpty Dumpty stands for Scatter and shows up only on the middle reel. Scatter must cover the central reel entirely for the feature to be triggered and once you manage it, you will win 6 free spins.

Another special symbol is the Heart which shows up only during free games on three middle reels. You have to collect 3 Hearts on one reel to get the corresponding reel covered by Sticky Stacked Wild. The stack of Wilds stays in this position till the end of the feature. The Falling Wilds Respin feature can boost your winning chances during free spins too.

"Unleash your inner child with Humpty Dumpty, a video slot offering an entertaining and rewarding gaming experience. This especially applies to the free spins feature during which up to three reels can be covered by Wilds completing your winning combinations. Help Humpty Dumpty recover from the great fall and you can win up to 12,500 in a single spin."