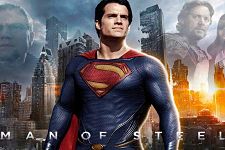 “A premium Playtech release offers a ton of fun combined with exciting features that can prove to be very lucrative.”

About Man of Steel

Launched in February 2017, Man of Steel is an exciting 5x3 video slot with 25 paylines in the regular and 50 paylines in the free spins game. The release draws its inspiration from the 2013 superhero movie of the same name, based on the famous DC Comics character Superman. The thrilling Playtech release offers two game modes, while players will have the chance to fight their battles on Earth or on Superman’s home planet, Krypton.

Players will encounter familiar characters, such as Lois Lane and the notorious General Zod, while the long list of features include Wilds, Scatters, bonus round and free spins game, which can make the entire experience pay off. The game offers a total of four progressive jackpots, which can be won at random, after any spin. Save the planet and go home with your pockets filled with many. What are you waiting for?

First things first, before you engage in the slots battle, you’ll need to place your bet. The wagering starts at $0.50 and goes all the way up to $2,500 per, while such top stake will delight the high rollers.

There’s also the Auto Play function, where you can choose the number of automatically played spins (10, 25, 50, 99 or until a feature is triggered). The Turbo Mode will speed up the spinning of the reels.

The game features two sets of symbols, depending on the game mode. Both these sets are further divided into low-value and top paying ones. There are 6 Wilds, 5 in the Earth mode and 1 in the Krypton mode, and all of them, as usual, can substitute for all other symbols except the Scatter.

The list of features starts with the Superman vs General Zod shifting Wilds. Whenever Superman Wild lands on the reels, it moves to the right on each spin, while General Zod Wilds moves to the left. If the two Wilds land on the same row, they will activate the Battle for Earth free games. Once this feature is triggered, Superman will fight General Zod and his warriors, with a total of four Wilds in play. If Superman lands on the same row as one of his adversaries, their clash will create additional Wilds. The feature will end only when Superman is defeated!

When Krypton bonus symbol lands on reel 5, it will award 7 free spins played with 50 paylines. The symbol featuring Jor-El will lock into positions during every spin, while up to 10 Wilds are available to offer more winning combinations and further boost your winnings. The World Engine bonus symbol landing on reel 5 will activate the bonus round of the same name, blasting up to 7 Wilds on the reels.

Man of Steel is a part of the DC Superheroes Jackpot network, meaning the game offers four progressive jackpots (Mini, Minor, Major and Grand), which are randomly triggered after a spin, no matter whether that spin is a winning or a losing one.

"Earth is in danger and Superman is the only one who can save it. Fight General Zod and his warriors, and enjoy the thrilling gameplay this exciting video slot has to offer, while the wide array of features can make the whole experience extremely rewarding."