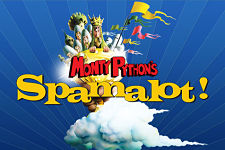 “Become a part of the Arthurian legend I this funny Playtech release that offers exciting bonus features and even more exciting Free Games rounds.”

Some will say that Monty Python's Flying Circus is one of the best comedy shows ever made and we totally agree. Apart from the series, the famous comedy group was equally successful on the big screen and one of their best movies was the 1975 release titled Monty Python and the Holy Grail, which later served as an inspiration for a musical comedy. Much like the motion picture, it is a highly irreverent parody of the Arthurian Legend, although it differs from the film in many ways. The play premiered in 2004 and a decade later Playtech launched the video slot of the same name.

Monty Python’s Spamalot is a 5-reel 3-row game with 20 paylines, offering plenty of humour as well as bonus features such as the Free Games round and 4 mini features, while a total of two progressive jackpots awaits those with lucky enough.

Before you embark on this never before seen adventure, it is important to place your bet. A coin denomination is set from $0.01 to $1, while the wager itself can be anywhere from $0.20 to $20 per spin.

The game has a nice, cartoonish look, while on the reels you’ll find a usual mix of low-value and top-paying symbols. Robin, Lancelot and Galahad and the Lady of the Lake are among the former, while the most generous icons of them all is King Arthur, awarding 600 coins for five of a kind across a payline.

The Holy Grail is the game’s Wild symbol, paying out up to 5,000 coins and substituting for all other symbols, except for Bonus, Scatter and progressive ones. Three Scatters activate the Free Games round awarding 10 spins. During each spin, up to 5 extra Wilds can be added to reels. Be on a lookout for the Jackpot Game symbol, since five of a kind during the Free Games round may give you the chance to win a progressive jackpot.

The Holy Grail Jackpot Game is a pick me game consisting of 6 levels – make it all the way to the final level and you may end up with your pockets filled with money.

Landing the bonus symbol on the leftmost and the rightmost reels simultaneously will trigger one of the four mini features:

Act 1 – the Storm The Castle Bonus feature – move the knights into 1 of 6 positions below the castle.

Act 2 – the None Shall Pass Bonus feature – this is where you’ll fight against the fearsome Black Knight and in the process win cash and multiplier prizes.

Act 3 – the Knights Who Say Ni Bonus feature – this is a variation on the old favourite, the pick me feature.

Final Act – the Killer Rabbit Bonus feature – where knights will have to cross a path guarded by killer rabbits and win bonuses if they manage to do so.

"This game may be filled with humour, but it’s very serious when it comes to prizes on offer. It will keep you seated for hours with its numerous features, while its two progressive jackpots make the game even more appealing. Check this Playtech title as soon as you have the chance and you won’t regret it, that’s for sure."

“Join the Dragon and Phoenix in a beautifully-design package that offers a number of thrilling features to create a memorable playing experience.”