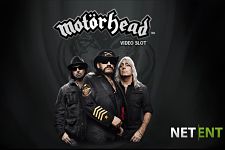 "If you like to gamble, then be sure to check out Motorhead video slot, you'll win some and lose some, you don't know what it'll be unless you don't give it a shot!"

Motorhead is a cult English rock band formed back in 1975, definitely one of the most popular musical names ever to have come from the British Isles. Over the period of four decades, the band released 23 studio and 10 live albums, as well as 12 compilations and 5 EPs.

Having sold more than 15 million albums across the globe, Motorhead has cemented its status as a world-class band with albums Overkill, Bomber, Ace of Spades and especially No Sleep 'til Hammersmith.

When speaking about Motorhead, for the majority of people, two things come to mind. The first one is the band's master mind, Lemmy Kilmister, who passed away in late 2015 and whose death marked the end of Motorhead.

The second one is the song The Ace of Spades, with a distinctive gambling theme and with various gambling metaphors, including cards and dice. Since Lemmy himself was a big fan of the slot machines, this NetEnt 2016 release is a perfect homage to the man and the band that made the history of rock music.

This 5-reel video slot with 76 paylines come with an usual 3-3-4-4-5 row layout and several features to make the whole experience more lucrative. The background scenery looks like the concert is just about to begin, featuring instruments, speakers and spotlights. You can enjoy some of the greatest Motorhead hits while you play, including the famous The Ace of Spades.

Low-value symbols are clovers, cherries and horseshoes, while the top-paying ones feature sevens, bell and stars. Lemmy himself is the symbol with the highest value and also the only one which gives payouts when only two of a kind land on the reels.

The Ace of Spades symbol is the Wild, and as usual, it can substitute for all other symbols except the Scatter. Landing three Scatters anywhere on reels 3, 4 and 5 triggers the Free Spins game awarding 10 spins.

The Mystery Reel feature appear on every spin during the Main Game and Free Spins, unless the Bomber feature is active. At least one reel is Mystery Reel, consisting of stacked Mystery and regular symbols. After the reels stop, any mystery symbols on them will change into 1 random symbol, though they can't transfer into a Scatter.

During Free Spins, Mystery Reels will consist of both mystery and Wild symbols.

Bomber feature gets activated randomly before a spin, only during the Main Game. A number of bombs, each of which consists of a cluster of mystery symbol, occur on the reels creating a minimum of 10 overlay mystery symbols. After the mystery overlay symbol has been created, the symbols are chosen in the same way as in the Mystery Reel feature.

If you're a rock fan, this game may easily become your favourite, though it will be appreciated by both penny punters and high rollers due to the fact it has a medium volatility, while the game's RTP is 96.98%.

"The Motorhead slot is consistent with its rock theme throughout the game and though it may not look appealing to those not familiar with the work of the English band, the hard core fans will have a new favourite slot to keep them seated for hours. Definitely a must try for everyone."