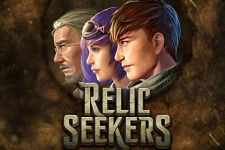 “Embark on an exciting quest to unearth ancient treasures and win up to 4,500x your wager in the Microgaming Relic Seekers slot.”

Microgaming and Pulse 8 Studios have prepared a thrilling release for all those daredevils that are looking for additional excitement paired with numerous ways to get lucrative prizes. Titled Relic Seeker, this game promises to take players on an adventure of epic proportions, set in the ancient tomb of the Dragon's Vein, where hidden riches are just waiting to be found.

Relic Seeker features a standard 5-reel, 3-row layout with a total of 25 paylines. It will see players join forces with Free Man, Professor Morgan and Nora as they try to find the ancient treasures. With the help of Rolling Reels, high-value symbols turning Wild and free spins with potential 2x multipliers, punters can enter the Dragon Tombs to take home the ultimate treasure.

Playable on all devices, from a mere $0.25 to $500 per spin, this release offers high variance, meaning winnings won’t be paid out often but will be worth waiting for.

The list of symbols that can be found on the reels includes 5 different wall carvings, Tortas and our 3 daredevils. Free Man is the highest paying regular symbols, awarding up to 90x the original stake for 5 of a kind across a payline. The lantern acts as Wild, substituting for all other symbols except for Scatter and helping players complete additional winning combinations.

The game utilizes the Rolling Reels feature: when a winning combination is formed, all the winning symbols disappear from the grid, with the new ones rolling down into the empty slots, while the newly-added symbols can lead to new winnings. Two or more wins in succession trigger the Symbol Turn Wild feature, transforming all 3 high-paying character icons into Wilds.

Land 3 or more Scatters to trigger the game’s Free Spins round. The feature will start with 10 spins, while another 3 or more Scatters will retrigger it. While the round is active, players will collect keys as they land on the reels. This is called the Collect Key feature, with 3 collected keys awarding 2 more spins, while 6 keys will award 2 spins with 2x multiplier. With the help of the Rolling Reels and Symbols Turn Wild features, players can end up grab huge prizes.

In addition to high volatility, Relic Seekers has an average Return to Player of 96.03%.

"Relic Seekers is a nice-looking game guaranteeing plenty of fun and offering numerous ways to get cash awards. During the Main Game and the Free Spins round, players can expect payouts of up to 2,250x the bet, while the biggest prizes can be scooped during the Free Spins round, where up to 4,500x the original stake can be grabbed on every free spin!"