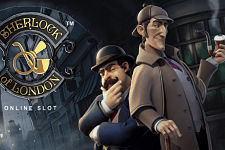 “Help the world's greatest detective solve another puzzling case, and grab neat prizes while you're at it.”

About Sherlock of London

Get ready for an immersive story about the famous detective residing at 221b Baker Street, brought to you by Microgaming and Rabcat. The Victorian London is waiting for you, along with his arch-enemy Moriarty and various other characters as Sherlock Holmes once again gives his best to uncover another mystery.

Sherlock of London is a 5-reel, 3-row video slot with 25 paylines, set in the sinister smog of old London. As Holmes and Dr. Watson pursue the city's most fearsome criminal across the Empire's capital, they'll be assisted by thrilling and potentially lucrative features, whose list includes Connecting Wilds, double wins and bonus spins. See if you have what it takes to help Holmes put villains behind bars.

Before the reels start spinning, players will need to place their wagers. Choosing the one that suits their budget and style of play is crucial if they don't want to lose all of their money fast.

Sherlock of London is playable on both desktop and mobile devices starting from a mere $0.25 bet, while the maximum stake is set at $50 per spin. When it comes to the game's winning potential, players can look forward to prizes of up to 1,000x their stake through regular winning combinations, while the Double Win feature offers the chance to scoop prizes worth 2,000x the original bet.

The reels are populated with the usual low-paying playing cards, along with symbols representing the game's main characters.

Sherlock’s symbol acts as Wild substituting for all other icons bar Scatter, thus helping players form additional winning combinations. Landing 2 or more Wilds will trigger the Connecting Wilds feature. The symbols involved will be connected, while those icons found in between will turn into Wilds as well.

Using the Double Win feature players can double their winnings. To succeed in it, they'll need to get 2 Wilds next to each other, or else the Connecting Wilds feature will be activated. It won't be easy to trigger this one, but it will be worth trying.

Landing single Wild symbol on the reels 1 or 2 will activate Bonus Spins, with players getting either up to 2 spins which they can use to try and activate the Double Win or Connecting Wilds feature.

Holmes and Watson can make their appearance as expanding Wilds during the Free Spin round, which is unlocked whenever 3 or more Scatters land on the reels. The daring duo can help punters grab handsome prizes.

Sherlock of London boasts medium volatility, along with a Return to Player of 96.03%.

"Sherlock of London brings together an interesting mix of features, nice payouts and stunning visuals. It promises plenty of fun for all those who enjoy a good murder mystery"

“Travel back in time to the age of cavemen and dinosaurs… and while you’re at, try to win some cash.”