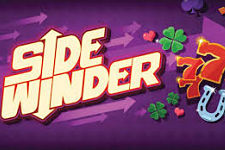 “It’s not often that you get to try out a new idea in video slots, so we were pleasantly surprised to find ourselves enjoying something completely new by Microgaming, despite some of its shortcomings.”

With a name like Sidewinder, this title looks unassuming. But don’t let it’s simple, pleasant visuals distract you – or the groovy, relaxing beat that finds a way to worm into your head so that you’re humming it for the rest of the day. There’s no big theme here, nothing to really capture your imagination and make you think about it. It’s all about gameplay with this video slot.

Sidewinder is played on a 5x3 playing field with between 243 up to 1,125 ways to win , with the middle three reels having an expansion beneath and above. However, not just any symbol can appear there – instead, only Wilds can fill these reels. These can either be activated by specific Wild symbols, or through the free spins feature, which ensure both of these special horizontal reels are active, bumping up the ways to win from 243 to 1125.

But before you can dive into this new, unique feature, you have to set the wager to something that suits your budget. You can bet between $0.10 up to $100 per spin, which is a massive range that should please most players.

The reels are filled with various icons, such as stars, spades, hearts, clovers and diamonds, as well as more slot-specific, yet still generic symbols, like bars, four leaf clovers, silver horseshoes, golden bells and red lucky sevens. The lucky seven is also the highest paying icon in the entire game at just 8x the wager, which makes it rather clear Microgaming want you to be focused on winning plenty, instead of one big win.

"While we may have been worried about how this Microgaming release would have turned out given their last attempt at experimentation, we were pleasantly surprised by Sidewinder. It’s an amazing game and while the concept isn’t earth-shattering, we would like to see more of it, possibly mixed in with other bonuses. We can’t wait to see what slot developers do with this. For now, we can recommend giving it a go and seeing it for yourself."

“Join the Dragon and Phoenix in a beautifully-design package that offers a number of thrilling features to create a memorable playing experience.”