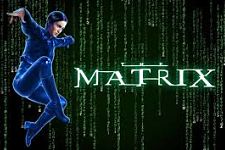 “Inspired by one of the most successful science-fiction movies of all time, The Matrix slot will see the battle for the future of humanity arrive at desktops and mobile devices of punters around the world.”

Play The Matrix with Real Money

When The Matrix was premiered back in 1999, a few could have predicted it would become a true cultural phenomenon and one the most important movies in the science-fiction genre. Created by the Wachowskis, starring Keanu Reeves, Laurence Fishburne, Carrie-Anne Moss and Hugo Weaving, the movie took us to a dystopian future, where the world is ruled by machines and humanity lives in a simulated reality called the Matrix.

The movie was followed by two sequels and though nearly two decades have passed since its debut, the franchise is still very popular, which was the main reason that Playtech made a decision to create a video slot based on the first installment of the popular franchise.

The 5-reel 3-row video slot with 50 paylines brings familiar faces from the movie, as well as some recognizable elements such as the famous “digital rain”, a computer code featured in the Matrix series, which serves as the game’s background.

It’s always exciting in the Matrix, with a number of thrilling features, which can help players grab more than rewarding prizes!

It’s hard to tell if you’re the One, but unlike that, placing is bet is far easier. A coin denomination ranges from $0.01 to $2, while the wager itself can be anywhere between $0.50 and $100 per spin.

The reels are populated by a mixture of low-value and top-paying symbols. Instead of playing cards, you’ll encounter characters from the aforementioned code used in the movie, as well as telephones and sunglasses. You’ll also find Trinity, Morpheus and Agent Smith, which can also appear stacked on the reels.

There are two Wilds, and while both of them can substitute for all other symbols except the Free Games Scatter symbol, the Black Cat Wild appears only on the rightmost reel. When covering the reel 5, it will duplicate to the reel 1 and trigger the Deja Vu Shuffle feature. All symbols will shuffle, which can result in new wins formed with a total of 8 Black Cat Wilds on the grid.

Scatter appears exclusively on the reels 1, 3 and 5 and activates the Free Games round. Players will then be prompted to choose one of the two Free Games rounds available: Agent Smith or Nebuchadnezzar.

In Agent Smith mode you’ll get 8 spins and a plethora of Agent Smith symbols on the reels, with more of them, awarded after every spin. The mode can’t be retriggered. In Nebuchadnezzar mode, the Sentinel Wilds will swarm the reels and lock in place after landing. The feature offers a symbol which can remove all Sentinels from the reels. The number of spins is unlimited, while the feature will end when 6 or more Sentinel Wilds find their place on the grid.

There’s no progressive jackpot on offer, but this medium variance game with an RTP of 95.14% can still help you take home a substantial amount of money if you’re skilled and lucky enough.

"The Matrix is definitely an exciting game that will be loved by the fans of the original movie, but also by those who enjoy a good video slot. There are enough features to keep you seated for hours, with plenty of opportunities to make this experience worthwhile."

Play The Matrix for Real Here