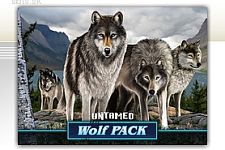 “The Untamed series has another adventure in store for all win-hungry players out there. Up to 180,000 coins are up for grabs… if you’re lucky enough.”

Microgaming is one of the biggest names in the online gaming industry, with an extensive portfolio consisting of high-quality video slots. This portfolio includes the Untamed series, which feature neat graphics and an interesting gameplay. Although very similar, they are distinctive enough to find their place among the slot lovers.

Along with the games inspired by the Giant Panda, Bengal Tiger and the Crowned Eagle, there’s also the one featuring the Wolf. Like the others, this one also features a 5-reel 3-row layout with a total of 243 possible ways to win.

When it comes to the design of this game, you’ll notice it follows the similar pattern as the titled in the series, but that’s not a bad thing, especially since that means it offers the pretty much the same features, including Collect a Wild Bonus and the Gamble Feature, while the Soaring Wild Feature has a lot of potential for huge rewards, all you need is a bit of luck.

If you’ve ever played a game from the Untamed series, you’ll notice the wagering options don’t differ much. The coin denomination ranges from $0.01 to $10, while your bet can be anywhere from a mere $0.30, up to $45 per spin.

The list of symbols starts with the usual selection of low-value symbols, which are represented by playing card suits, while the higher-paying ones include a landscape, deer, wolf cubs and an adult wolf. We mustn’t forget to mention the game logo Wild and Scatter, which are the two most important symbols featured in this 2012 release.

Wild symbol can substitute for all other symbols except Scatter that triggers the game’s Free Spins round.

Once you start hitting the Spin button, you’ll surely notice four empty boxes place blow each reel. Whenever Wild lands, these boxes will start to fill up, and when all four get filled, the entire reel will turn Wild for four spins. This feature offers neat winning possibilities since it’s possible to turn more than one reel wild at the same time.

At least three Scatter symbols are required to activate the Free Spins round, which will get you 10 spins. Sometimes, thanks to the lucky nudge feature, only two Scatters will be enough, since a third one will join them to activate the round. Wilds can appear stacked during the Free Spins feature, growing by one on every spin. They will keep on growing until so many of them find their place on the grid that you’ll surely win something.

If you want to win more, simply hit the Gamble button after any win, and you’ll get the chance to enjoy this potentially lucrative feature. You can adjust the odds to make bigger wins more lo less likely to occur.

This game will appeal to a wide audience of players due to its medium volatility while its average return to player (RTP) is set at 96.17%.

"This one is a great game that’s definitely worth trying. With neat graphics and a dramatic soundtrack, it brings a wide variety of potentially rewarding features, which can make the entire experience worthwhile. It doesn’t matter whether you had the chance to play a game from this series or not, Untamed Wolf Pack is a title you need to try as soon as possible."