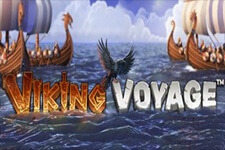 Vikings are undeniable legends whose deeds have altered the course of history. The British isles would have been a much different place if it were not for Viking incursions. Their plundering ways have taught Europe to fear these mighty Norse warriors.

But today, we are looking at a much different achievement of these old Vikings – reaching North America! Yes, this slot is set on the long voyage across the Atlantic, hundreds of years before Columbus. The sea gently shifts as you spin the reels! Your only company on this journey are the rowdy Vikings and the occasional bird flying by.

Viking Voyage is a 5-reel, 3-row game with 10 fixed paylines. The graphics show minor improvement over what we’re used to seeing from Betsoft. As for gameplay, it is defined by its multiple special features. These bonuses include re-spins, free spins and Wilds acting like Scatters.

The best thing about this layout is the fact you can change your total bet directly from the main screen. You can bet between $0.10 and $10 per spin, which is standard for 10 payline Betsoft slots.

Available symbols are split into three categories: high-paying icons that include three Vikings, mid-value symbols which are the golden cup, a Viking helmet and an axe and standard paying icons, which are the familiar playing card royals.

A blonde, smiling Viking is Wild, while the raven is the Scatter symbol. A Viking longboat is used as a bonus icon that triggers free spins.

Collect three or more identical symbols in consecutive positions from left to right to win. These winning combinations must follow one of the ten active paylines.

When three Wilds appear on the same reel, they will become a full reel Wild. This awards a single re-spin. During this re-spin, there is a chance stacked Wilds will appear and grant another re-spin.

If the bonus icon appears on the first and fifth reel at the same time, you receive 10 free spins with a 3x multiplier.

If you want to make some big risks while wagering, you can skip the grind and buy into free spins directly. It’ll set you back 70x your total bet each time! Like before, collecting small gold coins lowers this price, and if it reaches zero, the special feature autoplays.

Viking Voyage has a medium variance and an RTP of 96.12%. Make good use of the bonuses, especially free spins! Without them, you won’t be able to win the 3,000x jackpot!

"While this release isn’t a massive visual improvement, we can see signs that it’s getting better. Betsoft actually bothered to put in animations, however minor they may be. The special features are basic at first glance but work well with each other. Good looking and fun – there’s no reason to skip this slot!"