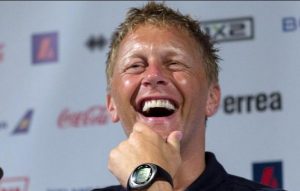 Small Nordic country of Iceland has been one of the biggest if not the biggest hit at this year’s European championship in France.

Our boys, as they are called back in their homeland have taken Europe by storm with their war chant from the stands and incredibly passionate, disciplined and tactically brilliant performances.

Their opening 1-1 draw against Portugal might have been attributed to beginners’ luck as Iceland started their first-ever Euro campaign with a huge point from the game against one of Europe’s biggest teams led by world-class star Cristiano Ronaldo.

A point against Hungary raised even more eyebrows in the second match of the group stage, but it was thanks to that impressive 2-1 victory over Austria that Icelanders really stood out from the crown, making their presence known at the European stage.

Progression to the knockout stage was considered historic success for the small country whose entire population tuned in to support their national team and flocked to France conquering the streets, stadiums and hearts of many.

England was meant to be their final milestone in the tournament as Roy Hodgson’s stellar team was considered firm favourites to dispatch Iceland in the round of 16. The Three Lions made one mistake though, they underestimated their rivals, taking them for granted and it backfired.

Lars Lagerback has fired a timely warning prior the game saying he had never lost to England in his coaching days. He and his faithful associate Heimir Hallgrimsson went on to extend the positive trend as Iceland pulled off the greatest surprise of the tournament by coming from behind to beat England and send them crashing home.

Icelancic coaching duo was hailed for its tactical master class as this unusual partnership continues to attract plenty of attention in world football.

Lagerback’s Icelandic odyssey started in 2011, while Heimir Hallgrimsson joined him three years later, when it was decided this country should put in some more effort to exploit its football potentials.

State governed changes allowed Iceland to create a solid base and a strong starting point from which this team made nothing but progress over the last three years.

With the 67-year-old Lars Lagerback, Iceland got the much needed expertise and experience. The managerial veteran of a many World Cups and European Championships with his native Sweden was joined by the 49-year-old part-time dentist with his only previous coaching experience at IBV Vestmanneyar in a domestic league with no professional clubs.

Their dynamic partnership has been a crack in the mould with football being a sport where one dominant leader is seen as an essential ingredient to controlling a dressing room and a pitch.

Hallgrimsson as an inside man was there to soak up the knowledge, gain experience and spread it like common folklore over a football-loving nation.

He got more than what he bargained for as he gets ready to lead Iceland to their first-ever quarter-final of a major tournament with Euro 2016 hosts standing between them and unprecedented success.

France are likely to learn from English mistakes and will not repeat the same mistakes, but Iceland fear no one. Their innate resilience was at display in every single match so far together with their physical abilities that overshadow the lack of raw talent and individual brilliance.

Hosts look at the 9/20 betting odds to dispatch Iceland in the quarter-finals, but Deschamps’ men will have to pick up their own game in order to do so.

Eleven fighters, one football wise man and a dentist stand in front of them with uncanny desire burning in their eyes.

Having already achieved the cult status in his homeland, Heimir Hallgrimsson has been given one additional honour 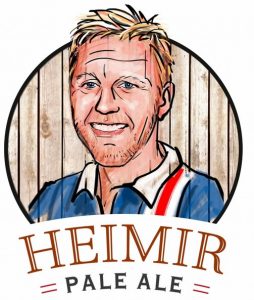 Heimir got his own beer now

back in his hometown of Vestmaneyyar.

Namely, our friend from Iceland Kjartan Olafsson Vido has brought this extraodrinady story to our attention, revealing that one of the smallest breweries in the country called The Brothers Brewery named its pale ale in Iceland manager’s honour deciding to name it – Heimir.

A light ale, much like Heimir’s hair will have its debut on the day of Iceland’s biggest match in history.

With his face on the label, this part-time dentist has been given an exciting and unusual tribute that is another proof of Iceland’s unity, team spirit and family atmosphere that continues to conquer hearts of many football fans around the globe.