Chelsea beat Liverpool at Anfield by 0-1 on Thursday, courtesy of a 42nd-minute strike from Mason Mount. It was an important match that saw current trends continue for both sides, with the champions losing their fifth of the last six Premier League games, and the Londoners yet to taste defeat under Thomas Tuchel.

Defensive injuries have hurt Liverpool’s campaign hard. It’s a fact that cannot be disputed, and it goes some way in mitigating their recent results. However, the situation has now become worrying indeed, with the team that sat top of the table at Christmas now without much realistic hope of finishing inside the top four, and even a place in the Europa League next season questionable.

Manager Jurgen Klopp fielded the newly recovered Fabinho in the heart of defence, alongside newcomer Ozan Kabak, and while the pair didn’t exactly play badly, the Brazilian playing out of position and the inexperience of the young Turk were telling. Further more, with captain Jordan Henderson out of action, Liverpool sorely miss Fabinho playing in midfield. It has been said before, but without any of these two in the middle section of the team, their press isn’t as effective and their moving of the ball forward is much slower, allowing for the opposition defence to consolidate in time.

The knock on effect is that the forwards work twice as hard as they did prior to this crisis and struggle to make anything happen, and for a team playing with no recognized number 10, a proper creative playmaker in an advanced position, it means far less chances. Less chances demand higher levels of concentration in attack, and that’s something the Reds currently lack as well. There have been numerous occasions, in this match and numerous ones before, when one poor touch or a wrong final-third decision ruined what could so easily have been a goalscoring opportunity.

An important thing to note here is that Liverpool actually played better than they did in their triumph away to Sheffield United on Sunday, but the difference in quality that separates the Blades from Chelsea proved too big – Liverpool simply don’t look like a team that can beat Chelsea at the moment.

It’s a frustrating situation for Klopp and his men for sure, and it seems to have drained all confidence out of them on top of everything else. The upcoming summer transfer window, if done smartly, could provide answers to many questions, but not the most pressing one: how do Liverpool arrest this drop and avoid the remaining part of the campaign being an utter disaster?

Given Liverpool’s ongoing defensive issues, there are some who suggest their opponents should be looking to take maximum advantage and hit them with everything they have, but it seems Tuchel is smart enough recognize that approach as a mistake to be avoided at all costs. It’s much more prudent to play responsibly and defend in numbers, and exploit any defensive weaknesses at the other end with passes in behind and well-timed runs. Such moments are sure to come when you play against Liverpool at the moment.

There was a particularly glaring weakness in Liverpool’s defence which Chelsea often tried to exploit, and it not only gave the visitors a number of promising situations, but it also brought about the only goal of the game.

Trent Alexander-Arnold, a good, attacking fullback known for his excursions up the pitch and a special knack for a pass, stays far away from his own goal for far too long too often. It seems clear that both Mount and Timo Werner were specifically instructed to peal away wide to their left and occupy the space behind Alexander-Arnold’s back whenever possible, as well as that the midfielders preferred that direction for their passes to any other. So it came about in that 42nd minute that N’Golo Kante found Mount there, and the 22-year-old drew Fabinho out wide only to cut back inside and beat him for pace, before placing a fantastic shot to the far bottom corner out of Alisson Becker’s reach.

It’s hardly surprising that Hakim Ziyech, playing on the right wing, as well as Christian Pulisic who replaced him towards the end, made very little impact on the game.

At the back, the Blues always defended in numbers, but the back three of Andreas Christensen, Antonio Rudiger and Cezar Azpilicueta should be mentioned for their fine individual performances, as well as Kante and Jorginho who provided constant protection in front.

All in all, Chelsea are better than Liverpool at the moment, and they fully deserve to be ahead of them in the Premier League table.

The Premier League may enjoy a high reputation as a tough league where being above your opponent in the table guarantees nothing ahead of a match, but it’s been getting the reputation of one of the worst leagues in Europe when it comes to officiating and the use of VAR technology.

There were three particularly controversial moments in the game where the refereeing was, to put it mildly, questionable. In the 24th minute, Werner broke forward chasing a Jorginho pass in behind. He reached the ball ahead of Alisson and put it in the net, but VAR ruled the goal out for alleged offside. Those infamous lines were drawn, but the footage didn’t show nearly enough for anyone outside the VAR room to make a conclusion, apart from it being very, very tight. 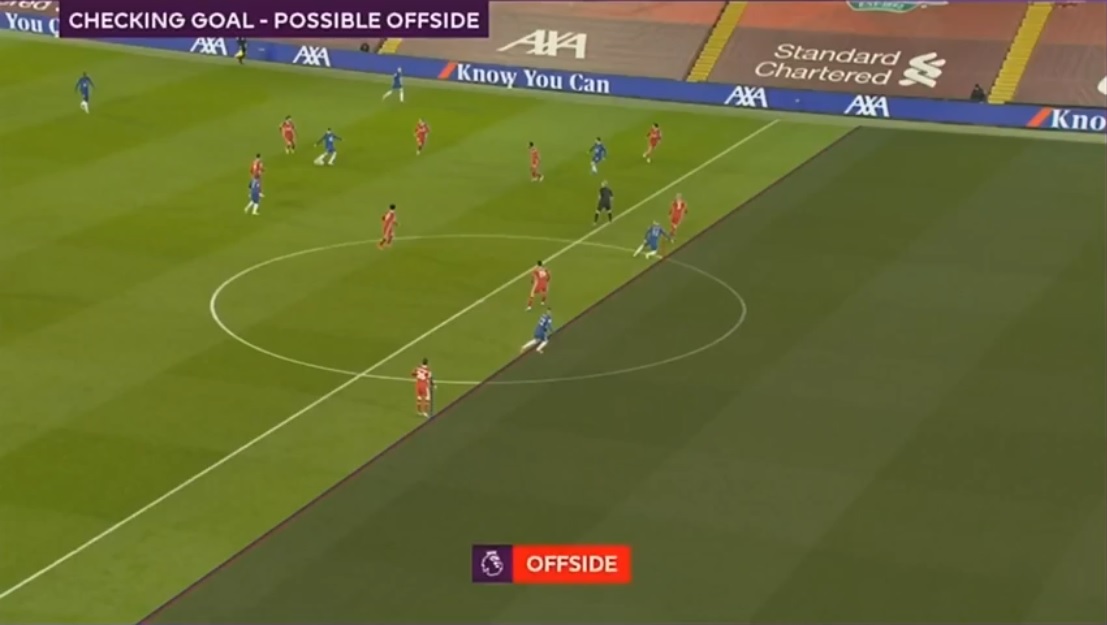 It felt Liverpool were let off the hook there, but they were made to pay for it in the second half, with interest.

Minute 48 was passing when Mohamed Salah played Robero Firmino into the box down the right flank. The Brazilian tried to put it across, but Kante’s raised arm, with which the Chelsea midfielder clearly made himself bigger as an obstacle, stopped it. Several Liverpool players claimed a penalty, but referee Martin Atkinson wouldn’t hear of it and there was no reaction from the VAR room this time. 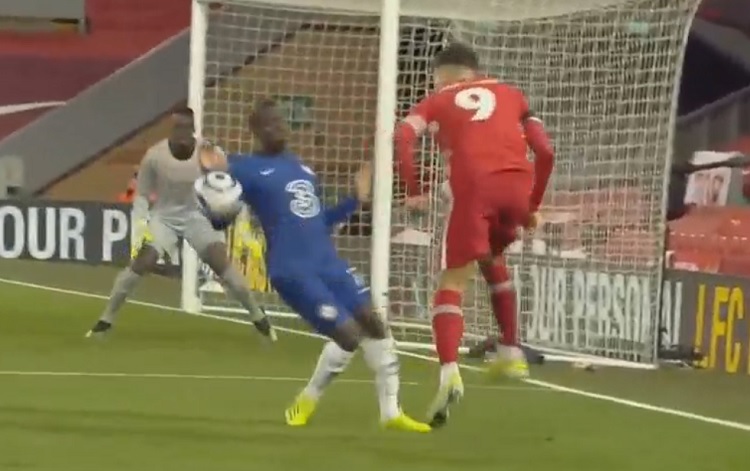 Finally, towards the end of the game Mateo Kovacic, who had replaced Mount in the 81st minute, kicked the ball at the head of Sadio Mane who was lying on the ground at that moment. Replay showed the Croatian midfielder could have easily stopped himself but simply didn’t. Mane was understandably furious and when he got up, Kovacic continued provoking him until the Senegalese turned away. Again, the incident was allowed to fly with no reaction from Atkinson whatsoever.

It’s becoming quite obvious that the English FA have no intention of doing anything to improve the seriously fallen standards of refereeing in the Premier League, and more people around the world who enjoy football are beginning to dislike the English game and rather watch other leagues instead.

Liverpool are now in seventh place with 43 points, four off Chelsea in fourth, with Everton and West Ham in between, both with a game in hand. Chelsea are doing very well under Tuchel, and with the former Paris Saint-Germain boss in charge from the middle of the campaign, they hardly could’ve hoped for better at this point. The Reds, meanwhile, need to do some serious work between now and May and some serious planning for the summer if they don’t intend to see everything they’ve achieved under Klopp in the last couple of years crumble into dust.