Manchester City will take some stopping this season 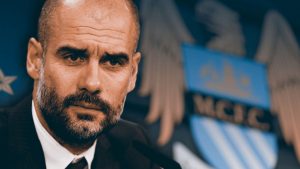 Pep Guardiola has already had a big effect at Manchester City

Manchester City has started life under Pep Guardiola with a hundred per cent record in the Premier League and a 4-0 win over German side Borussia Monchengladbach in the Champions League group stages.

Some people believed that Guardiola would take some time to settle in the Premier League, but the influence that he has already had on the City players has made a mockery of that sort of thinking.

Quite simply Manchester City has very good players and a world-class boss in charge, so it is logical that they are dominating games so far this season.

No question that Pep is special

Pep Guardiola is right up there on my Premier League man crush alongside Liverpool’s Jurgen Klopp (despite the fact he now manages a rival club from my own!). I have loved Guardiola’s managerial style since his early career with Barcelona.

He created something special at the Catalan club, using some of the ideas of his upbringing at La Masia and those of former mentor Johan Cruyff, Guardiola devised a system of football that would take the world by storm.

Guardiola is a special boss and has a special way of thinking about football. It is not about all-out-attack, but controlling the game and dominating the opposition, no matter who his team are playing against.

The perfect example was when City went to Manchester United and dominated for much of the first half. A lot of other bosses would have gone slightly more cautiously into a game at their main rivals, but not Guardiola.

He was so confident of his tactics and the fact his players understood his ideas that he played like he has done in every other game this season. The approach showed why the Catalan boss is so highly-rated.

Bringing the best out of the players

If a player buys into Guardiola’s ideas and fits into his style then the former Barcelona boss will improve a player and get every last bit of ability out of said player. The Barcelona greats of Xavi, Andres Iniesta and of course Lionel Messi talk glowingly about Guardiola because of their admiration for the boss.

These are players who have won everything that club and world football has to offer in Xavi and Iniesta’s case. If players like that rate Guardiola so highly then you know he is a good man-manager, although Swedish superstar Zlatan Ibrahimovic would disagree.

The perfect example of Guardiola bringing the best out of a player at Manchester City is England winger Raheem Sterling, who has looked like a different player under Pep Guardiola.

The 21-year-old struggled to live up to his £49million price tag last season following his move from Liverpool.

Worse was still to follow as he struggled to make an impact with England at Euro 2016 and was used as one of the scapegoats for the Three Lions embarrassing exit from the competition.

No doubt the criticism must have affected Sterling as he is only human, but Guardiola has restored his confidence and the winger is enjoying a fine season for the Citizens. His critics have suddenly gone into the woodwork and Sterling is back to enjoying his football.

Guardiola’s arrival has also brought the best out of Belgian playmaker Kevin De Bruyne. The 25-year-old was performing well last season before an injury derailed his season. The former- Chelsea star has kicked his performances up a notch this season and is becoming more important to the Citizens with every game.

City by far the favourites for the title

Manchester City started the Premier League campaign as favourites for the title and not much has changed as they are still favourites to be crowned champions at odds of 4/6.

Some would argue that Manuel Pellegrini’s City won the first five games of last season and looked to be heading for the title very early in the campaign, but the wheels fell off for the Chilean and the season unravelled.

The Citizens opponents so far this season have also been questioned, as they have played some poor opposition. A team can only beat the opposition in front of them and City has done that in a fairly comfortable fashion

Guardiola has stated that there will be no complacency from his team on his watch. After the success the Catalan boss has achieved in the game you have to take notice when he speaks and he is not one for taking his foot off the gas.

He will be working just as hard in the weeks and months ahead to improve his team and at the moment it seems City will be very difficult to stop this season.

Will Manchester City coast to the Premier League title this season?