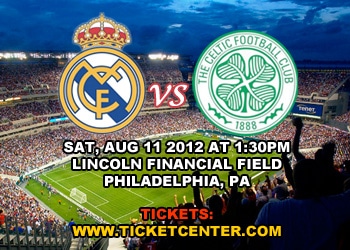 Lincoln Financial Field in Philadelphia will be home to a friendly match between the most decorated club in Europe Real Madrid and Scottish giants Celtic.

The highly entertaining game is scheduled for August 11 and will be played as part of the 2012 World Football Challenge event, designed as a series of friendly matches played in the United States and Canada in July and August.

Tickets for the match are already on sale at www.TicketCenter.com and can be purchased for as little as $40. The most expensive tickets cost $450.

Before they face Celtic at Lincoln Financial Field, Real Madrid will play three other friendly matches as part of the 2012 World Football Challenge.

The fans at Lincoln Financial Field will have a chance to see Real Madrid and Celtic face each other for the first time after 32 years, having previous met in the 1980 European Cup quarter-final.

With nine European Cup titles to their name, Real Madrid are the most successful European club of all times and are seen as one of the most popular as well. Los Blancos are on the road to restore domestic and European domination and have just ended a three-year trophy drought in La Liga, having beaten arch rivals Barcelona to the league title.

Football fans across the North America will have an opportunity to see some of the world’s top players in action, including Cristiano Ronaldo, Karim Benzema, Mesut Ozil and Kaka, as well as controversial coach Jose Mourinho, dubbed by many as the best tactician in the world.

Los Merengues are set to meet European giants Glasgow Celtic, who are part of arguably the biggest rivalry in world football together with Glasgow Rangers. Having been established in 1887, the Bhoys are one of the oldest clubs in the world and they have since won 43 league titles, 35 Scottish Cup trophies and 14 Scottish League Cups. In 1967 Celtic become European Cup champions by defeating Inter Milan and the interesting thing it was just one of six trophies the club won that season.

The Bhoys are currently struggling to return to old glory days, but they are the reigning Scottish Premier League champions and will use the North American tour to prepare for what awaits them in the 2012/2013 Champions League.