Veselin Trajkovic in Editorial 26 May 2021 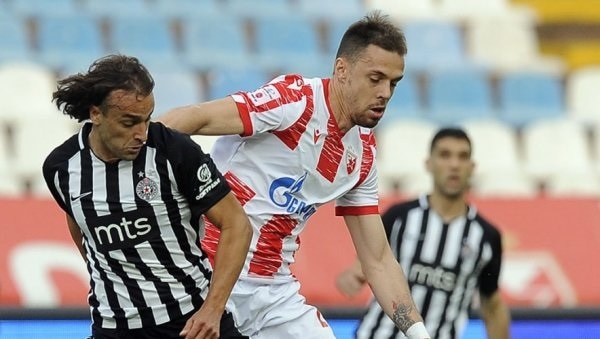 Having already been crowned league champions, Red Star Belgrade completed the Serbian double by beating arch-rivals Partizan in the final of the Serbian Cup on Tuesday at the Rajko Mitic Stadium. The match was settled through a penalty shootout after 120 minutes of play without any goals.

In recent years, matches between Red Star and Partizan have always yielded little in terms of goals, and this time it was no different, but it should be said that it wasn’t for lack of trying. They usually play cautiously and with a lot of grit and passion.

Well, the grit and the passion were certainly there, but both teams played to win, that much was clear from the start. Following an early period of Red Star domination, Partizan grew into the contest which became reasonably equal.

There were chances, fairly promising ones, at both ends of the pitch, but Diego Falcinelli for the red-and-whites and Nemanja Jovic for the black-and-whites failed to hit the back of the net on several occasions. The teams attacked in waves, first one then the other, and the contest could have easily gone either way.

It’s never easy to stand between these two teams as the referee. There is usually much aggression in duels, sparked by the fierceness of the rivalry between Serbia’s two biggest clubs. Incidents are often an unavoidable part of the ‘Eternal Derby’, but even though it happened again at the very end, referee Srdjan Jovanovic did a fine job overall in trying circumstances.

He refrained as much as possible from whipping cards out of his pocked in the first half and managed to conclude the period without bookings. He mostly resorted to speaking to players and calming the tension as much as possible, and for the large part of the match, it proved efficient.

The few wrong calls that happened during the 120 minutes were rather reasonable ones, given that there was no VAR at his disposal and that in every one of those occasions his vision seemed impeded.

Rarely do derby matches need anything to increase the tension, but penalty shootouts after a tough battle tend to do that anyway; it’s only natural.

Partizan goalkeeper Vladimir Stojkovic insisted on kissing the ball and handing it to the opponent directly ahead of every Red Star penalty, in a rather provocative manner. Finally, Red Star’s Nikola Krstovic finally cracked and after dispatching his shot into the net, he proceeded towards Stojkovic yelling as he came. Stojkovic reacted by pressing the ball aggressively against the face of Krstovic, who then collapsed as if struck by lightning.

Naturally, conflict arose immediately as the rest of the players and staff from both clubs rushed over. Things calmed down in the end and both Krstovic and Stojkovic walked away with a yellow card.

It was actually an interesting situation for a moment. Stojkovic had already been booked for time wasting at the very and of the extra time, and Milan Borjan, his Red Star counterpart, urged the referee to send him off. However, rules were changed regarding this particular eventuality last year, and cards shown during penalty shootouts count separately now.

Borjan saved the two Partizan penalties that followed which proved enough to win the trophy for Red Star for the first time since 2012, as Stojkovic failed to save any.

Red Star will now take a short break and then start preparing to enter the Champions League qualifications in the second round. As for Partizan, they’ve fallen victim to UEFA’s decision to reduce the number of Europa League teams from 48 to 32 for 2021-22, and they will now play in the newly established Europa Conference League.