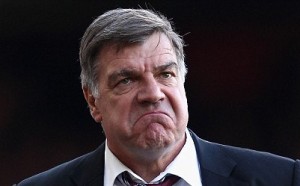 Plenty of work ahead of Sunderland manager / Image via matchpint.co.uk

Sunderland will have no reason to feel festive as they have recorded their fifth consecutive defeat in the Premier League to finish the calendar year deep inside the relegation zone with only 12 points after 19 rounds.

Sitting second from the bottom, Sunderland conveniently start the new year with a game against the rock bottom Aston Villa in a proper relegation derby.

The Black Cats welcomed Liverpool at their Stadium of Light on Wednesday night in the Premier League’s curtain-dropper in 2015.

Sam Alladryce’s charges have ultimately succumbed to a 1-0 loss with Christian Benteke scoring a match-winner only 22 seconds in the second half of the game to wrap up the second win in a row for Liverpool. The 25-year-old Belgium forward has scored his fifth goal in 15 appearances and his second in a row, following another match-winner against Leicester City last time out.

In addition to his back-to-back winners for Liverpool, Christian Benteke will be disappointed with his poor finishing, as the Belgian missed a late clear-cut chance when was denied by Mannone in a crucial moment.

Three points at Sunderland will see Liverpool go up to the 7th place in the Premier League standings, level on points with Manchester United who are occupying the sixth position, and only one point short of Leicester City, who are sitting in the last European spot.

Jurgen Klopp will be pleased with the three points, but will have plenty to reprimand his players for, as the Reds have failed to convert his ideas to the pitch, losing possession too easily and showing lack of concentration and composure in crucial moments.

The game between Sunderland and Liverpool has seen a slow start with both sides testing the waters for the first 15 minutes.

Jermaine Defoe had a great chance to break the deadlock early on as the experienced England striker wasted a promising opportunity and a goal-bounded effort from the edge of the box. Simon Mignolet performed a brilliant save to stop the Sunderland forward from a sure goal.

Roberto Firmino, who was deployed in the midfield for the occasion, behind Christian Benteke as the target man, got in a good shooting position on the edge of the area firing a strong bullet which fled towards the left side of the goal, but Vito Mannone did excellently to punch in onto the post.

At the half-hour mark it was Fabio Borini who picked up a pass and shot towards the goal, but his fine effort went just wide of the right post.

Roberto Firmino and Adam Lallana attempted to change the scoreline in the first half, but their efforts were left fruitless. Liverpool dominated the possession, but Jurgen Klopp will be disappointed with his team’s intercepted play and a lot of mistimed and misplaced passing.

Liverpool’s dominance in the game was seen through the number of shots – 17 to Sunderland’s 8.

Second half was opened with a bang. Adam Lallana tied up Christian Benteke with a magical ball and the Belgian managed to find himself some space inside the box to send the ball into the bottom left corner of Mannone’s goal.

After returning to the starting line-up as the Liverpool’s only change to the Boxing Day fold, the Belgium international’s desire was met with recklessness and lack of composure. The towering striker had a clear-cut chance to wrap it up in the closing stages of the game, when he collected a great pass inside the box and missed a golden opportunity.

He came one-on-one with Sunderland shot-stopper, who managed to clear Benteke’s low drive with an excellent save.

It was a déjà vu moment for Christian Benteke, who was involved in an exactly the same opportunity against Leicester City. Luckily, his miss proved not to be costly in the end, as Sunderland did little to jeopardize Mignolet’s goal in the second half.

A couple of strong-willed efforts were all cut off in the final third, at the safe distance from the Reds’ goal and it became apparent that Sunderland will have to work on their cutting edge, as soon as they sort out the terrible defending during January transfer window.

The Black Cats have conceded their 38th goal this term and they boast the worst record in the Premier League.