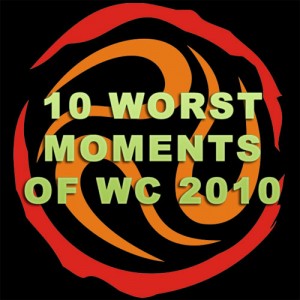 Most of the world is suffering from soccer withdrawal symptoms with the World Cup having gone away for another four years. Africa’s first Soccer World Cup had plenty of good and bad moments. Here are ten of the worst- the ones you wouldn’t want to see a repeat of at the next edition in Brazil.

Nigeria were comfortably in control of their second Group B game against Greece before Kaita’s moment of madness turned the game on its head. The Alania Vladikavkaz midfielder aimed a kung fu kick at Vasilis Torosidis on the sidelines and was given his marching orders, thus reducing Nigeria to ten men. The Greeks made full use of their one man advantage and managed to beat the Super Eagles 2-1.

Would Nigeria’s World Cup have been different if not for Kaita’s stupidity? Fans back home in Nigeria certainly thought so- Kaita has already received more than 1,000 death threats in his personal email.

Another Keita, albeit one with a slightly different spelling, takes ninth spot on this list. Ivory Coast forward Abdel Kader Keita’s blatant bit of playacting got Brazilian star Kaka sent off in the 2010 World Cup.

If Keita does play at the next World Cup in South America, he is sure to get a frosty reception from the Brazilian fans. 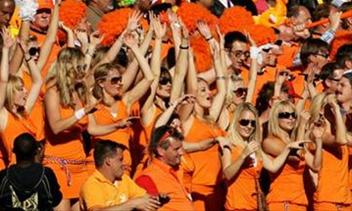 Budweiser were the official beer sponsors of the 2010 World Cup.

A group of 30 odd women came wearing bright orange dresses to the Netherlands vs Denmark game.

These two statements might not make much sense if you read them together, but they certainly did for soccer’s governing body FIFA.

As the “once bitten, twice shy” saying goes, FIFA officials immediately took them in for questioning as they suspected the ladies to be part of an ambush marketing stunt by Bavaria Beer. Bavaria were guilty of creating a similar controversy at the last World Cup in Germany.

Despite FIFA’s legal threats, Bavaria ended up being more than happy with the whole affair. Bavaria garnered more online coverage than all of FIFA’s World Cup sponsors, and outperformed Budweiser by a whopping 558%.

Did FIFA make a mountain of a molehill or was it a brilliant planned stunt by Bavaria? You decide.

Brazilian midfielder Felipe Melo is not known in footballing circles as a man who has a cool head on his shoulders.

Arjen Robben’s runs down the right flank had been a constant source of irritation for the Brazilians in their quarterfinal against the Netherlands and with his side trailing by a goal, Melo decided to let Robben know how he was feeling by placing a stamp on the Bayern winger. It earned him a red card and also extinguished Brazil’s hopes of a record sixth World Cup title.

They say all that starts well ends well. England’s golden generation came into this World Cup hoping to repeat what Geoff Hurst and co. had done on home soil 44 years ago. They were comfortably expected to beat the United States in their opener and were leading 1-0 when Robert Green produced this howler and allowed Clint Dempsey to equalise for the United States.

England drew their opener 1-1 and never looked like potential champions in their remaining games. As for Green, he lost his No.1 spot to David James and with young Joe Hart waiting in the wings, it is unlikely we’ll see more of Green in an England jersey in the future.

Had that goal been allowed, the United States would have won their game against Slovenia instead of merely drawing it. The decision very nearly cost Bob Bradley’s men a spot in the Round of 16.

Frank Lampard has often been accused of underperforming in an England shirt, but all his previous mistakes might have been forgotten had this strike been ruled legitimate and helped England to beat fierce rivals Germany in the Round of 16.

As fate would have it, everyone else but the referee and his assistant spotted the goal, and Lampard and England went on to suffer a humiliating 4-1 loss.

Ajax skipper Luis Suarez broke African hearts and became a national hero for Uruguay when he used his hands to fist away a certain Ghana goal in the dying minutes of his country’s quarterfinal. Ghana striker Gyan Asamoah missed the resulting penalty and the Black Stars went on to lose in the shootout. Suarez’s red card was of little consolation to millions of heartbroken Ghana fans.

All the good work done by Johann Cruyff and his Total Football teammates of the 70’s was undone by Bert van Marwijk’s side of 2010, who felt that injuring their opponents was the best way to win. Holland’s tactics were clear for all to see, especially in the quarterfinal against Brazil and the final against Spain.

Leading the charge were midfielders Mark van Bommel and Nigel de Jong. Seen below is a video of a De Jong kick on Spanish midfielder Xabi Alonso, which resulted in a broken rib for the latter, but did not get the former sent off.

At a World Cup, you’d definitely expect the defending champions and the runners up to at least make it past the group stages.

Not only did France and Italy fail to win a single game, they also finished at the bottom of their respective groups.

France’s players revolted against coach Raymond Domenech after the expulsion of Nicolas Anelka from the squad and refused to train. Domenech in return refused to select several first team players, including skipper Patrice Evra, in the must win final group game against France. Les Bleus lost the game and took an early flight home.

Italy, on the other hand, came to life only in the last ten odd minutes of their game against Slovakia. It was a case of too little, too late for the Azzurri, who joined the French in making an early exit from the Rainbow Nation.

Finally, someone connects the two that I noticed. That Netherlands was playing a dirty game, not all its players but too many. They did so with Brazil and the referee didn’t call them on it, but if one of them fell because a Brazilian tapped one then the ref would act, this is the real reason the Brazilian player stepped on the player from Netherlands and why the Brazilians were scored on. Now I won’t take it away from Sneijder, he did good. But the ref favored the Netherlands. That didn’t happen in the final though where the ref Howard… Read more »

Indeed Ivan, Van Bommel was lucky not to get booked against Brazil.

france early exit was caused by the french football federation. how can you sack a manager and allow him to take the team to a competition?the world cup for that matter!