The 10 Hottest Female Soccer Players On The Planet

As the women’s soccer is slowly gaining world recognition, female soccer players are becoming increasingly popular, with one of the reasons behind this popularity certainly a number of attractive women in soccer nowadays. The following list is the perfect proof that soccer really is a beautiful game.

The 32-year-old USA international is already a veteran in the world of football but her striking good looks still lure fans to the stadiums across the United States. The two-time gold medalist, Mitts have amassed over 100 caps for the national team and she is married to NFL quarterback A.J. Feeley.

Leslie Osborne is another testament to the fact that USA national team are one step ahead of the competition when it comes to both soccer qualities and visual appearance. As the picture shows, Osborne has a sponsorship deal with German sportswear company Puma, which she secured by simply introducing herself to Puma’s North American headquarters.

The Swedish beauty plays her football for FFC Frankfurt and Sweden national team, but there is much more to her than just football. In addition to studying Mechanical Engineering in Stockholm, she is also one of just few female soccer players who have came out publicly about being a lesbian.

Rachel Unitt has that girl next door look that makes her the hottest soccer girl in England, as well as one of the most beautiful women in soccer. After playing for Wolves, Everton and Fulham, she joined New Jersey Wildcats, making sure that most of the women from this list ply their trade on the American continent.

Charlotta Eva Schelin plays a striker for the Swedish national team and she is often compared to Zlatan Ibrahimovic, although I am sure we can all agree she is far more beautiful than the Milan striker. She has won numerous awards during her soccer career, giving us all a chance to see her glamorous side.

Sporting a casual look, Hope Solo easily finds her place on this list, and need I say that she plays for the USA national team? Atlanta Beat goalie plays just as well as she looks and she once even managed to go on 1,054 minutes without conceding. In all fairness, would you have the heart to score with Hope between the sticks?

Amy Taylor retired from football in 2004 following two surgeries on her ankle, but the memory of the Australian beauty in a soccer shirt still sits vividly in our minds. Amy Taylor has appeared in various magazines and photo shoots, while she has also launched a media career.

Monica Gonzalez is another retired soccer player who has now switched to coaching but one look at her is enough to see why she makes this list. The former Mexico international says she has no problem with taking sexy photos and we can only hope she doesn’t change her mind.

Milene Domingues is certainly the most famous girl on our list, although her failed marriage with compatriot Ronaldo undeservedly outshining her decent soccer career, even if we would prefer seeing her on the runway than on the pitch any time. The ex-model holds a unique record for ball juggling, hitting the ball 55,198 times before it fell to the ground. I really cannot see her ex husband doing better. 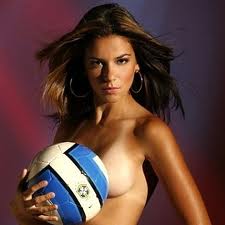 And the first place goes to…Laisa Andrioli. The smoking hot Brazilian is just 22 but she is already regarded as the hottest female soccer player ever. Laisa Andrioli has dated Brazil World Cup star Denilson, who can be forgiven for making a mess out of his career after meeting a girl like this. She’s got much racier pictures than this one, but we prefer to keep things decent here.

Jessica Landstrom is the sexiest women ever!!
Beautiful, smart, cool and play great tuff soccer.
We love her!!!

Wait till Women’s World Cup soccer this year. Plenty of hot female soccer players for the guys to look at and the players’ HABs for girls to look at as well.

What about ALEX SCOTT ????
prettiest girl of the world *.*
http://cache.daylife.com/imageserve/01xB4QY5Zt3lS/439x.jpg

Today, there is another Alex from England:ALEX GREENWOOD.

Where the heck is Alex Morgan?!!!!

She does not deserve to be on the list (remember her rude incident against England at the World Cup?).

i really don’t see why you would say that?

it is missing Sabrina Hammoudi

You forgot the capital “S” on scott-should be Scott.
Besides there is another ALEX from England that is hot:ALEX GREENWOOD.