The REAL Wimbledon are promoted to the football league 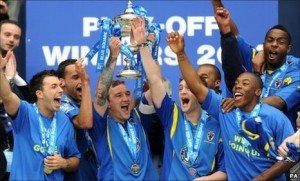 AFC Wimbledon’s ascension to the football league is one of true romance.

AFC Wimbledon were formed in 2002, as a protest to Wimbledon FC moving to Milton Keynes.

Its an incredible rise for a the club that is less than a decade old. AFC Wimbledon was founded by the fans for the fans. The tiny club lead to fans of other clubs forming independently run clubs.

In true Wimbledon style the club have achieved it by hard work and sheer grit. They are the first club to be formed this century to make it into the football league. They are simply amazing.

AFC Wimbledon is the sort of story that could be straight from a Roy of the Rovers comic. If somebody would have scripted their rise it couldn’t have been faster or more dramatic.

Their boss Terry Brown deserves immense credit, having been in charge of the club since 2007. He has put in so much hard work in to the club. He believed in the club’s vision and he is getting his reward for his faith.

The club have kept the spirit of the old Wimbledon alive with the likes of coach Marcus Gayle. The former-Jamaican international is currently reserve team manager and has stayed true to the old Wimbledon tradition.

Wimbledon FC were accustomed to being underdogs but they managed to rise to the top very rapidly. The clubs most famous moment was their 1988 1-0 FA Cup final victory over champions Liverpool.

The club were also a founding member of the Premier League in 1992. Terry Brown and Co. have already started to make their own bit of history by making it into the football league.

AFC Wimbledon currently play their football at Kingsmeadow, which is also used by Kingstonian. The ground only has a capacity of 4,700 with just 1,265 seats, so it’s not exactly ideal.

The club do however have plans to build their own stadium. The clubs promotion to the football league may well bring those plans forward.

Finances are tight at the club and their promotion to the football league will help raise the profile of AFC Wimbledon.

Everybody at the club have deserved their success. Especially those loyal Wimbledon fans who formed the new club. Those fans must be so proud of their fledgling club. Maybe in a few years the Don’s may reach the heights of their predecessors.

This is just the start of what could prove to be one of the most incredible stories football has ever seen.

Can AFC Wimbledon reach the heights of Wimbledon FC?

Fantastic to see them doing so well, and I would love to see them continue to rise. hopefully in another 9-10 years we could be talking about them making their way back to the Premiership.

I second that Bacon, especially if they were above MK Dons!