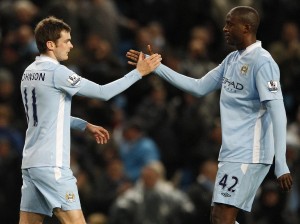 According to the Daily Mail, Yaya Toure of Manchester City, formerly of FC Barcelona, has said that if City win the Premier League in 2011-12 he will go absolutely ‘crazy’.

By the looks of it, Toure may be able to pop the champagne by Christmas.

“At Barcelona, it was sometimes so easy to play because we were a lot better than other teams so to play as a defender in the Champions League final was not as difficult as you might think,” said Toure.

“We were amazing that year so it was not that hard.

“Here at City we have different challenges and to me the Premier League means everything. You have to understand that I mean that.

“One time when I was still in Spain I saw Kolo [Toure] and [Didier] Drogba when I was with the national team. A few months earlier Drogba had won the Premier League.

“I said, ‘Didier I saw you on the TV and you were so happy. I have never seen you like that. Why was that?’

“He told me it was because it’s just so hard to win the Premier League that the happiness is like nothing before.

“Even when you go to Blackburn and Stoke and Blackpool . . . it is so hard every week. He said I wouldn’t understand until I played here. He was right.

“He told me that here you play Boxing Day, New Year’s Day . . . you never get a break. I had not experienced it before.

“So when you win you are so happy. When I signed for City I called my brother and told him if we won any cup I would be so happy.

“Guys like Lampard, they play good football but they take it so seriously and play very hard. Football for them is everything. They take it so personally because they don’t want to lose. They don’t quit,” said the Ivorian international.

“When they go on the field they simply think they will win every time and that is why they are so aggressive.

Might as well keep his sanity, or what’s left of it by just thinking City will win the title.