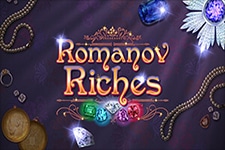 “Although the Romanov family may have met its tragic end, rumors about their opulent wealth never stopped circulating. People were quite fond of the idea of there being a large room full of treasure somewhere and Microgaming decided to create a whole game about it.”

While we understand the desire for opulent wealth and theming a slot around it, it’s never been something that we found particularly attractive. We’re all playing slots because we’re hungry for a jackpot that will change our lives for the better, but we enjoy a backdrop that’s more than just a fancy looking background and a bunch of jewels tossed about. If you were hoping for something more substantial thematically, you won’t find it here.

Romanov Riches is a 5-reel video slot with 15 fixed paylines. Available across all platforms, the title uses a mixture of stacked mystery symbols and respins as the main course of special features, with a bonus symbol leading to large wheels with prizes being an occasional boost. The title is rather reliant on its special features, however, and can feel boring to play outside of them.

Every good treasure hunter knows that, if your end goal is to find the wealth you’re after without losing all your cash looking for it, and proper budgeting is the key to operating a successful expedition. The coin denomination can range between $0.01 up to $0.50, with the minimum wager being $0.20 and the maximum bet being $100 per spin, which provides a rather nice and wide betting range for players.

There’s nothing particularly interesting that you can find on the playing field. You have playing card symbols which you have seen in a myriad of other titles already 10, J, Q, K and A all litter the reels, and this time, they’re in an even more gaudy color scheme that just blends together in a mixture of dark blue and purple. You also have higher paying gemstone icons, out of which there’s a red, blue, purple and green gem.

A snowflake symbol is used to represent Wilds, whose only purpose is to replace other icons, except for Bonus symbols.

Each reel has a stack of mystery symbols which can be replaced by any of the game symbols in the paytable, including bonus symbols which activate another feature. On a regular spin, the same icon will replace the two left-most mystery stacks while the remaining ones may be replaced by a different symbol. Respins occur when you have a full stack of matching symbols on the reel two, three or four. During the feature, the triggering stacks are locked in place and the remaining reels respin. If you get another full stack of that same icon, you win another respin. You don’t get a respin when you win a full reel of one symbol, though the jackpot score from it will most likely make up for that.

"While it’s a good game, we can’t say this Microgaming release managed to woo us too much. The graphics look great, but the theme itself was rather underwhelming, as it only offered basic symbols and a few gemstones. The mystery symbols felt like a letdown most of the time, as well. If the game sounded fun, by all means, give it a go, but we’re personally skipping this one."