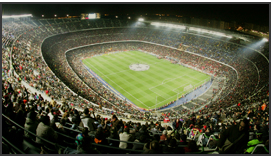 Soccer has been a very well-known sport in today's world. A lot of people enjoy playing and watching this sport and that even includes kids. If you are someone who loves soccer then chances are you might want to know how to score soccer tickets easily. Apparently, if you want to search for tickets the best way for you to look for them is by using the internet. The web can provide you with the opportunity to find websites, companies or people who sell these tickets at the best prices.

Here on SoccerNews.com you can find tickets to English Premier League matches, La Liga, and MLS matches, as well as seats to pre-season games and various friendlies. From our website you will find tickets to events sold by reputable brokers/resellers and ticket providers advertised on our website are guaranteeing safe and secure payments as well as insurance if the event gets cancelled or if you are unable to attend.

People used to just purchase their soccer tickets in some ticket agencies or in the stadium or venue where the game is set to be played. Sometimes, your efforts of travelling to the venue just to get hold of the tickets will be useless because they might be sold out already. This case often happens if the teams playing are popular ones or if it's a major league. You will end up feeling disappointed and the only way which you can watch the game is through your television screen. However, because tickets for football can now be purchased online, you can now book them ahead of time. There are some websites that post announcements on when would the tickets be released. All you have to do is just wait for the release of the tickets and you can immediately book them. You no longer have to waste time and energy of going to the venue just to purchase these. What makes online booking a lot better is that you can even choose which seats you would want.

Because the industry of online ticketing has grown and developed, you will be able to find a lot of companies or websites that sell tickets and they are only a few clicks away. You will be able to get the best seats on soccer games or other sporting games that you might like. However, there are certain things that you have to keep in mind. You have to purchase your ticket from a website that can be trusted. Since not all businesses are created equally, you will be able to find those that sell fake tickets and promotions. These people only want to take advantage of those who want to get tickets badly. You should find a vendor that is has a good reputation so that you will have a safe and secure transaction. You can always look for some reviews and comments made by previous customers just to make sure. It will be a wise decision if you would investigate and do some research first before shelling out some cash.

Purchasing your tickets online with us here on SoccerNews will help you get the best seats available especially if you book earlier. If you get lucky, you can even find some legit ticket promos. All it takes is just a few clicks and a few searches. It will really help a lot if you get yourself updated with regards to the release dates of the soccer tickets online so that you can book them immediately once they are available.