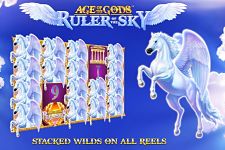 Age of the Gods Ruler of the Sky

“Embark on a thrilling journey with one of the most famous creatures of Greek mythology... and win up to 1,000x the bet on each spin.”

Age of the Gods Ruler of the Sky - Free Play

About Age of the Gods Ruler of the Sky

Playtech is once again taking us to Ancient Greece with another video slot from the popular Age of the Gods series. Drawing inspiration from Greek mythology has been successful for the renowned developer who has once again created an adventure of epic proportion. This time, the game is focused around Pegasus, a mythical winged divine stallion, and one of the most recognized creatures in Greek mythology.

Age of the Gods Ruler of the Sky is a 5-reel 4-row video slot with a total of 40 adjustable paylines on offer. Apart from its stunning visuals, this Playtech release launched earlier this year has plenty of exciting and potentially rewarding features that further enhance the playing experience. Players will benefit from stacked Pegasus Wilds on all reels, along with Mighty Pegasus Free Games feature where there is no limit to the number of spins that can be won. And if that's not enough, the game offers four progressive jackpots, which awarded at random and can be sky-high.

Before this adventure begins, it is important to choose the right wager. The game's coin denomination ranges from $0.01 to $10 while the bet itself can be anywhere between a mere $0.01 – for one active payline – and $400 per spin. There’s no doubt that both penny punters and high rollers will easily find the bet that suits their style of play and budget.

Featuring a lovely cloudy background, the game brings ornately-drawn symbols on the reels, including a usual set of playing cards ( A, K, Q, J, 10 and 9), but also harps, vases, temples, and Athenian helmets.

You'll find Pegasus himself on the screen, serving not only as the Wild symbol but also appearing stacked on all reels. As the game's Wild, Pegasus can replace all other symbols except Scatter, helping players complete more winning combinations. At the same time, the mythical horse is also the game's highest-paying symbol, awarding up to 25x the bet for five of a kind on a payline. Fill the reels with Pegasus Wilds and expect to get 1,000 times your wager!

Landing three Scatter symbols on the three centre reels will activate the Mighty Pegasus Free Games feature and award 5 spins. While this feature is active, Pegasus Wild will make its appearance more often, increasing the chances of scoring big wins. Land additional 3 Scatters on the three middle reels and you'll get another 5 spins. Bear in mind there's no limit to how many times this feature can be retriggered!

"Age of the Gods Ruler of the Sky is a neat addition to Playtech's popular series. The game is beautifully designed, while it's rather simple when it comes to features on offer. Sure, stacked Pegasus and Mighty Pegasus Free Games can lead to rewarding payouts, but it does seem the developers could have done more. Anyway, this is a title worth checking out, and we recommend you do it as soon possible."