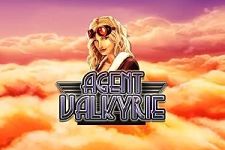 “Soaring through the skies, beating back criminals in an alternate steampunk world in which flight is on the same level as boats were once is certainly something we find appealing, and it helps there’s some decent gameplay backing the visuals.”

In recent years, there’s been a boost of popularity for the steampunk aesthetic. While there’s obviously more to it than just tossing steam and cogs all over the place, there’s no denying it’s a very visually impressive style that sticks with people, probably why it rose to popularity as much as it did. When we saw the first previews for Microgaming’s latest release, we were rather hyped up, and while it didn’t quite become the steampunk paradise we were hoping for, it was still an enjoyable experience.

Launched in May 2018, Agent Valkyrie is a 5-reel 3-row video slot with 25 fixed paylines. There are several special features on offer, including three different bonuses that can occur during normal gameplay by collecting coins on specific reels and a free spins bonus that combines these three special features and adds a sprinkle of player choice to make things interesting.

No matter how skilled a pilot you are, even without fuel costs in this steampunk world, you still have to consider plane damages from combat which you take while apprehending the criminals. As such, you have to keep your budget in check! The coin denomination goes from $0.01 to $1.00, while the wager itself goes from $0.25 up to $25 per spin.

A list of game icons includes some letters and numbers – 10, J, Q, K, and A, as well as some unique icons such as an aviator’s scarf, a map, and three of the grizzly sky pirates that are here to ruin our heroine’s day.

The slot’s logo is used for Wild and it can replace any other icon except for Scatters or Coin symbols while a compass stands for Scatter which rewards some minor wins, but more importantly, free spins after collecting three or more of these at once. Finally, Coin icons can appear on the second, third and fourth reel and when you collect three on a single reel, it rewards a single spin with a feature.

The reason what features turn into what is important is because once you win free spins, you can set which feature will accompany every free spin. You will win between seven to fifteen free spins depending on how many Scatters triggered the bonus. You can choose for the title to automatically decide the mixture of these three coin features to be spread apart, or you can create your own mission and pick which one you like best.

"A very decent showing by Microgaming, although it is one we really couldn’t find ourselves sinking in any deeper. That said, there are some good parts to it, like the coin features being winnable during normal gameplay and the player choice during free spins."