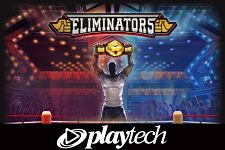 “Only the bravest dare to enter the ring... Are you one of them?“

Welcome to the arena, where there can be only one winner! Do you have what it takes to become the champion? If your answer is yes, then step into the octagon – similar to those that can be seen in UFC – and show what you're made of. Face tough competitions and earn your title!

Eliminator is an action-packed video slot developed by Playtech, featuring 5-reel 3-row layout with 20 paylines. Knock out your opponents and win rewarding prizes along the way. Be on a lookout for Collapsing Reels and the game's two Free Spins feature – one with the medium variance option and one with the high volatility. Both of them offer the possibility to win an unlimited number of free spins, while the latter can award a dynamic win multiplier that can increase your winnings by up to 10 times!

Before the fight starts, you'll need to place a wager. Choose wisely or you may end up losing your money way too fast. Placing a bet is very easy, as you don't need to bother with the coin denomination – just select any amount ranging from $0.20 to $500 per spin and that's it.

The game is set in a fighting ring, featuring cartoon-style graphics and symbols that perfectly match the entire theme. Players will encounter differently coloured boxing gloves on the reels, among other icons, as well as 5 eliminators – Tank, Master Chan, Typhoon Terry, Joe the Hurricane and Violet.

Master Chan is the game's highest-paying symbol, with all 5 across a paylines awarding 25x the triggering wager. There's also the Wild symbol, which can appear on the 3 centre reels only, and has the power to substitute for all other icons bar the Scatter.

The Elimination feature will – as its name suggests – eliminate a fighter from the Fighter column, located to the left of the reels, once all instances of his symbols disappear from the reels. This will happen following the collapse of the reels, and it can be repeated. Eliminating a fighter in a single spin awards a cash prize that can go up to 40x the wager.

This game is all about its 2 free spins features, which are unlocked by landing 3 or more Scatters anywhere on the reels. Do that and you'll be able to choose between the Red Games and the Blue Games feature.

The Red Games feature offers 12, 25 or 50 free spins to initially start the round, while the Collapsing Reels feature comes into play with consecutive wins increasing the multiplier going up to 10x. Land a minimum of 2 additional Scatters to retrigger the feature.

The Blue Games feature awards 10, 21 or 40 free spins respectively, and has a different reel set than in the main game. It gets retriggered the same way as the Red Games feature, and both of them have no limit to how many free spins can be won.

"Eliminators is an action-packed slot that offers an interesting theme, cartoonish graphics, dynamic gaming experience and the possibility to grab bigger wins. The latter comes from multipliers in one of the game's Free Spins feature."