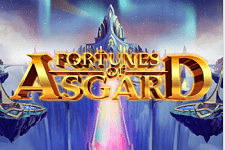 “While Valhalla is still too far away for most gamblers, it doesn’t stop our dreams from reaching the grand halls of the old Norse Gods – or the amazing jackpots they offer brave mortals.”

About Fortunes of Asgard

If you’ve never heard of Asgard until this point, we’re somewhat surprised, because it made its rounds through popular culture. In old Norse mythology, it was one of the nine realms which were inhibited by the Gods, and from that idea, several big names borrowed for their own benefit. Most notably, Disney made their own take on the idea of Asgard when it comes to Thor’s comic books and movies and the Stargate science fiction series also portrayed Asgardians as advanced aliens, hinting that old Norse gods were actually advanced alien races which visited Earth at some point.

Launched in April 2018, Fortunes of Asgard is a 5-reel 3-row video slot with 20 fixed paylines. The way the developers keep you on your toes is by making you choose between two special features, and then enabling both when you activate free spins, increasing your odds of winning the jackpot.

While the Norse gods are doubtless eager to see you test yourself for their favour, you shouldn’t forget to prepare for the battle beforehand. The coin denomination goes from $0.01 up to $0.5, and the wager itself can be set between $0.20 up to $10 per spin. With a large variety of bet options, both lower budget adventurers can try their best at winning Asgard’s treasures just as much as well-funded explorers who will only be satisfied by the greatest treasures.

The list of game icons include Hellia’s books, Thor’s hammers, large wooden shields alongside Thor and Hellia themselves. The visuals are very cartoony and these have to be the most friendly adaptations of Norse deities we have ever seen. Alongside the unique icons, you also have several numbers and letters which include 10, J, Q, K and A and make up the lower ends of the paytable while Hellia and Thor are the biggest hitters.

Lightning striking the ground from a cloudy sky is the symbol representing the slot’s Wild. Wilds serve to replace all icons except for Scatters and Bonus symbols and have their own cash prizes. The Scatter symbol is a rainbow road leading to the home of the Norse gods. Three or more Scatters will reward between 10 to 25 free spins, depending on how many Scatters trigger the feature.

At the start of the game, you make a choice between Thor or Hellia. Depending on which god you choose to support, you get access to a specific feature. When Thor lands next to his hammer, that whole reel strip turns into a vertical 1x3 Wild. If Hellia lands adjacent to her book, Hellia turns Wild and remains sticky for one extra spin. During free spins, as an added bonus, both these features are active at the same time.

Landing three Bonus symbols on the first, third and fifth reel triggers a point-and-click mini-game, in which you pick between different galaxies, with each one rewarding a cash prize. This stops when a Collect pick is chosen.

"We like Microgaming slots and it is clear Fortunes of Asgard has work put into it. And while it is appealing visually and the features are interesting, the paytable makes it near impossible to score a solid win, which drags down the overall score."