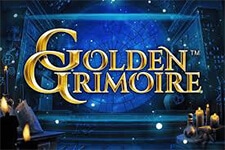 They say lucky gamblers have a magical touch that lets them tilt the odds in their favor. We cannot say we count among those lucky few, but maybe we can learn a few tricks from the NetEnt’s release.

A grimoire is a book that instructs users how to perform magic. Depicting rituals and means to master this mysterious element, making it a must have for any sorcerer worth his salt. Some would no doubt use it for selfish reasons, while others would take it as their duty to defend people. For us here at SoccerNews? We would just flip the RTP to 100% and hope the developers do not notice!

Golden Grimoire is a 5-reel, 4-row video slot by NetEnt which offers 40 fixed paylines. Set in a mysterious house, players are treated to a starry sky and reels suspended mid-air using cyan portals. But the magic does not stop there – instead, its influence has spread onto the offered special features! It creates mystery symbols, Wilds, activates free spins and turns mystery icons sticky.

Gamblers can adjust their bet level and coin value, which affects their total bet. The minimum wager for this NetEnt release is $0.20 per spin, while the maximum stake is $400 per spin.

The game is set in a dark room, illuminated by candles, the night sky, and the faint glow of portals. The portal will occasionally shimmer, the night sky outside slowly moves, and the candlelight bobs to simulate burning away. Symbols are not nearly on the same level as the graphics, unfortunately. Diamonds, spades, clubs and hearts form the lower paying icons. Higher paying symbols have unique artwork, depicting precious gemstones grasped tightly by various creepy crawlies.

A sealed red book is the Mystery icon and the golden skull represents Wild. A triangle with a keyhole in the middle is Scatter used to trigger a special feature.

Mystery symbols appear on the third, fourth and fifth reel during normal gameplay. When they land, an icon is randomly chosen between lower and higher paying symbols, or the Wild. The chosen icon then replaces all mystery symbols on the playing field. Wilds can only land if a mystery icon transforms into it.

Three Scatters on the first, third and fifth reel trigger 8 free spins. During this special feature, mystery icons become sticky and can occupy the second reel. While they remain in place, they transform into a different symbol after each free spin.

Golden Grimoire is a low volatility title with an RTP of 96.44%. The maximum payout is worth 200x your total stake on each spin.

"While some developers come close, nobody beats NetEnt when it comes to graphics. The low variance means you will see lots of bonuses triggering, keeping players invested. No huge jackpots to be found here, however. You will have to hope for a lucky streak, so you can collect multiple smaller wins into a big pile."