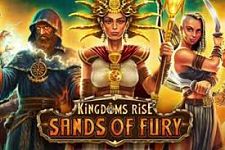 About Kingdoms Rise Sands of Fury

Playtech's Kingdoms Rise series is about to get even more exciting, as the new Sands of Fury game hits the market. It brings plenty of excitement in a beautifully-designed fantasy-themed package. Taking players to one of the desert regions of the kingdom, the slot can easily become one of the developer's most popular games in the coming period. And it's time to find out why.

The action takes place on a 5x3 reel set with 20 lines to play on. Although the paytable may seem low-value, there are several progressive jackpots on offer, which not only increases the size of your payouts but also further add to the excitement. Feature-wise, there are Character Wilds, a Wild Fury bonus round, as well as locked Wilds and respins.

Playable from a mere $0.10, the Kingdom Rise: Sands of Fury offers a variety of betting options, as players can place bets going up to $1,000 per spin.

Set in the desert region of the Kingdoms Rise fantasy world, the reels are populated by 4 different kinds of gemstones, as well 5 major characters – a reptile, a wizard, a warrior, a general and the Gold Queen, who can award prizes of up to 7,5x your stake for all 5 of a kind across a payline.

Character Wilds, featuring 5 different characters, are one of the most important parts of the game. Each of these characters will be displayed at the top of the reels. Landing Wild that matches the character will unlock the Wild Fury bonus round, activating the feature reel and locking character Wild in its position.

With the help of random symbols, players will be able to collect tokens. Once enough tokens are collected, they can be used to unlock new features but also respins and locked characters. This is done using the Kingdoms Rise Shop.

In terms of prizes, the game offers a couple of progressive jackpots, just like other games from the Kingdom Rise series. The biggest one available is the Epic Jackpot.

Kingdoms Rise: Sands of Fury is a medium-variance game, offering an RTP of 96.23%.

"Kingdoms Rise: Sands of Fury is all about landing character Wild on the reel with a matching Shield & Swords symbol above it. Although its prizes may not appear so tempting, the progressive jackpot shared with the other game from the series can award fantastic payout."