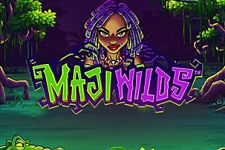 “Embark on an exciting Voodoo adventure with Playtech’s Maji World, offering payouts that go up to $50,000.”

Are you ready for a taste of Creole? Well, you better be, because this October 2017 release by Playtech will take you down south to Louisiana with an eerie atmosphere and a frightening cast of characters. Set deep in the jungles of the Bayou State with the Voodoo-themed video slot Maji Wilds promising plenty of excitement and many opportunities to grab serious prizes.

The game draws its inspiration from the Louisiana Voodoo, a set of spiritual folkways which represent a cultural form developed by the population of African origin.

The vibrantly-coloured game features a 5x3 layout with 50 paylines, stunning visuals, and a bit of magic to help you make the most out of what it has to offer, with a number of various bonuses which will improve your chances of scoring hefty winnings.

Before entering the jungles of Louisiana, be sure to choose a bet that suits your playing style and your budget. Coin denomination is set from $0.01 to $1, with the wager starting as low as $0.50 and going all the way up to $50 per spin.

On the reels you’ll find symbols such as bones, skulls, potions, an alligator, a voodoo priestess, while the voodoo priest is the highest paying symbol (bar Wild), offering a payout of $500 when all five of a kind find their place on the grid.

The symbol represented by a deck of cards is the game Wilds and can substitute for all other symbols, as well as randomly turning into an even powerful symbol. Maji Wilds doesn’t feature Scatter, which means there is no Free Spins round, but don’t think that makes the game less exciting.

All of the games specials are awarded by the game’s Wild symbols, through one of the five features.

The first feature involves standard Wild, which will, as usual, substitute for any other symbol, helping players create more winning lines. But the real magic starts with the other four Wild features.

When Wild turns into the Possession symbol, the spirit will randomly possess other on the reels, turning them into new Wilds. When the snake appears, it will slither off the grid, turning everything in its path into additional Wilds.

The Doll symbol will stay locked in this position for the next five spins, while the multiplier offers players the chance to increase their winning from 2x to 5x, and will leave the reels only when taking part of a win, which means there’s a guaranteed win with this one!

"Maji Wild may not boast a large number of features, but it definitely offers a dynamic gameplay with lots of opportunities to grab lucrative winnings. You’ll be mesmerized by its visuals and neat animations, taking a bit of Creole magic wherever you go, since the game is available for both desktop and mobile devices."