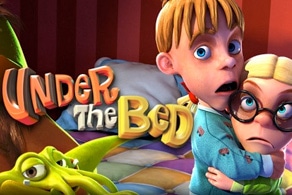 "Under the Bed is a 3D slot from BetSoft, played at five reels and thirty paylines, featuring two bonus rounds, Double Up feature and Sticky Wilds."

Under the Bed - Free Play

Play Under the Bed with Real Money

About Under the Bed

Launched on desktop and mobile in May 2013, Under the Bed is another high-quality 3D slot developed by BetSoft where the action revolves around one of children's worst fears. The game houses five reels, thirty paylines and three rows of symbols, with up to 105,000 credits to be won at a time due to numerous special features. Second-screen bonus and Free Spins round will definitely come in handy, while Sticky Wilds can be a nice surprise as well.

Jesse and Jane are brother and sister who have been left home alone and they are trying to get through the night despite the presence of quite a few funny looking monsters in the bedroom. These creatures are not only hiding under the bed, but can be found in other areas of the room, making the kids' task even more difficult. Spin the reels of Under the Bed to watch how the action unfolds.

The game options panel found below the reels is pretty straightforward, seeing as there are three fields with + and – symbols used to make your selections and the fourth is showing your Total Bet at any time. Simply choose coin value from $0.02 to $1, activate up to 30 paylines and wager 1-5 coins per line before pressing Spin, Max Bet Spin or Auto Play.

Obtain three or more Bed icons in any position and you will trigger the second-screen bonus round. Help Jesse and Jane fight off as many monsters as possible for bigger profits. If Mysterious Door symbol appears in the middle position of reel 3, a total of 12 free games will be played. A paying combination of any monster icon with a special rim around it activates the Sticky Wild feature, with Wild symbol remaining on the reels for a random number of spins.

Play Under the Bed for Real Here