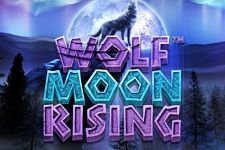 “Enjoy this exciting Betsoft Gaming's release and grab prizes going up to 20,196x your stake!”

Wolf Moon Rising is 2019 video slot launched by Betsoft Gaming. It's definitely an interesting addition to the offering, especially as the features it has on offer promise a ton of excitement, not to mention the fact this slot pays both ways in its Free Spins round. High rollers will appreciate its high volatility, which means the game has the potential to award huge prizes.

Wolf Moon Rising has a standard 5-by-3 layout, along with a total of 25 paylines. As we've already pointed out, it boasts thrilling features – such as Feather Talisman Free Spins, Wolf Moon Fortune instant wins and Elemental Wilds. Players can look forward to an entertaining gaming experience, while the rewards on offer can go up to a staggering 20,196x the original wager.

Since the game has such a huge win potential, the developers have opted to limit the available wagering options. The betting starts as low as $0.20, with the maximum wager going up to $5 per spin.

As the name of the game suggests, its main character is the white wolf, with grey wolves, mountain lions, eagles and buffalos also making their way to the reels. In addition to the usual set of playing card symbols, there are other icons whose design was influenced by Native themes. The Bonus symbol features two bird feathers, while the wood symbol serves as Wild.

The Scatter symbols trigger the game's Free Spin round, and to do so, players will need to land at least three of them, which will also award 12 spins. This feature can be very lucrative, since apart the pay both ways system, it offers a neat 2x multiplier which gets applied to all wins.

In addition to these icons, Wolf Moon Rising also features Elemental Wilds, which substitute for other icons – bar Wold Moon and Feather Talisman Scatters – and help punters form additional winning combinations. As for Wolf Moon Scatters, which appear as the game's third special symbol, they simply appear on the reels and award instant wins – nothing more.

"Although its visuals could have been better, Wolf Moon Rising offers the potential for big wins, and is a more than a fine choice for those looking for a high-volatility release."