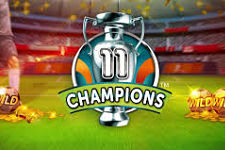 “Microgaming has a real treat for all football fans. Get out there, score goals and win staggering prizes.”

Microgaming teamed up with their partners at Gameburger Studios to add another football-themed slot to the company’s already impressive portfolio of games. Titled 11 Champions, this May 2020 release promises exciting gameplay with a decent amount of neat features.

11 Champions is played on a “pitch” consisting of five reels and three rows, with a total of 20 paylines on offer. Apart from a thrilling experience, the slot can award prizes of up to 5,000 times the bet. An RTP of 95.93% and the game’s high volatility may not be appealing to everyone, but we’re sure 11 Champions will receive lots of attention due to its win potential and rewarding features.

A $0.20 wager will be sufficient to get the reels spinning, while the maximum allowed stake will not be able to exceed $50 per spin.

Players can benefit from a range of fixed jackpots, Mini, Minor, Major and Grand, with the latter being the most generous one.

The game’s football theme is omnipresent, from a football pitch in the background to symbols such as goalkeeper gloves, jerseys, boots and trophies populating the reels.

The first feature we’re going to mention is the Action Reels. It will introduce a special symbol, called the Champion. The Champion will change positions, marking icons with frames. The special symbol will be able to dribble and pass, while the Shoot icon will trigger the Blazing Wild Streak feature.

If the Blazing Wild Streak symbol lands on the Action Reels, a respin will be awarded, with all positions marked with a frame turning wild. While the feature is active, all wins will be multiplied by a number displayed on the Shoot icon.

Three Scatter symbols appearing on the reels at the same time will activate the slot’s bonus round. Here, players will reveal cards, with each one corresponding to one of the game’s jackpots. Reveal three matching cards to claim the corresponding jackpot!

"This is an excellent option for football fans, as it boasts a nice atmosphere, thrilling features and rewarding prizes. The game’s visuals are stunning, and will surely add to the excitement. Kudos to Gameburger Studios for creating a slot that stands out from other sports-themed releases in the market."