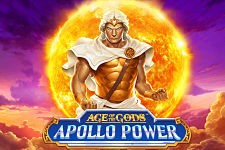 Age of the Gods Apollo Power

“A nice addition to the series, Apollo Power offers exciting features, progressive jackpots and plenty of fun. An ideal combination.”

Play Age of the Gods Apollo Power with Real Money

About Age of the Gods Apollo Power

Apollo Power is a part of the Playtech series called Age of the Gods, which has so far proven to be very popular among punters of all ages. This exciting game has plenty to offer: a number of potentially lucrative features, a familiar Ancient Greek theme and four randomly awarded progressive jackpots.

Age of the Gods: Apollo Power has 6 reels, 4 rows and 50 paylines. It is playable across desktop, mobile and tablet devices. Inspired by the Ancient Greek god of sun and light, it promises an exciting experience with the help of such features as Apollo Power Respins and prizes going up to 1,000x the original bet. There's only one way to find out if the gods will smile upon you!

This beautifully designed slot is playable from a mere $0.50 bet, while the maximum stake can't exceed $500 per spin.

Once the reels start spinning, players will encounter the usual set of playing card symbols, as well as swords, crossbows, harps, wreaths and rings. Apollo is on the reels as well, as the highest-paying standard symbol, awarding payouts worth 12x the bet for all 6 across a payline. There's also a Wild symbol, substituting for all other, with 6 of these in a winning combination paying 20x the stake.

The Apollo Power Respins feature is activated when Sun Wild lands anywhere on the grid. Once the feature is triggered, players will get free respins, while Sun Wild will move to a different position after each respin, leaving the Wild symbol on its path. The respins will come to an end once Sun Wild returns to the position from which is started moving.

As we've pointed out, the game offers four progressive jackpots. This prize, which is a part of the Age of the Gods Jackpot Network, is won through the randomly activated Age of the Gods Jackpot feature. Three identical jackpot symbols award the prize, with the Power, Extra Power, Super Power and Ultimate Power Jackpots on offer. The latter is the one with the power to change your life.

This is a medium variance title, offering an average Return to Player of 96.47%.

"Age of the Gods: Apollo Power is a nice-looking game, although rather simple. Due to its volatility, the opportunities to win huge prizes come from progressive jackpots. All in all, it is a good addition to the series and it's a game worth checking out."

Play Age of the Gods Apollo Power for Real Here