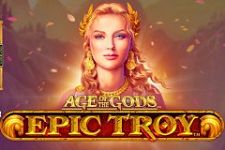 Age of the Gods Epic Troy

“Another exciting release from the Age of the Gods series takes players to the legendary city of Troy.”

Play Age of the Gods Epic Troy with Real Money

About Age of the Gods Epic Troy

Playtech's popular Age of the Gods series includes a title named Epic Troy. The developer's series has become extremely popular among players of all ages, due to the exciting experience it delivers, but also because of the stunning progressive jackpots, it has to offer.

Epic Troy also brings impressive payouts, as well as the usual progressive jackpot prize. Apart from the jackpot, the size of its cash awards goes up to 600x the wager per spin. Beautifully-designed, with a wide variety of features on offer – including Wilds, Scatters, respins and free spins – this 5-reel slot with 243 different ways to win is a worthy part of the Age of the Gods series.

Set in the ancient city of Troy, the game brings 3 legendary characters from the Trojan War: Achilles, one of the greatest heroes of the Greek world, Paris, who shot Achilles with an arrow, and Helen, the woman who started the war in the first place. She is also the highest-paying regular symbol, awarding payouts of 2.5 the stake for all 5 in a winning combination. All 3 of these symbols can appear fully stacked on the reels.

The Wild can appear only on the 3 middle reels, substituting for all other icons bar the Scatter. As there are no traditional paylines, a minimum of 3 matching symbols on successive reels are needed to get paid.

The Free Games bonus feature is triggered whenever 3 or more Scatters appear on the reels, awarding a payout of up to 50x the stake and 6 free spins. This feature can be especially lucrative, as only Wilds, Scatters, and the 3 main characters appear while it’s active. Retriggering the feature adds 12 spins to the count, with all 3 respin features available.

Age of the Gods: Epic Troy also features the Age of the Gods jackpot, just like the other games from this series. Randomly activated, these jackpots – four of them – can award handsome payouts, especially the Ultimate Power Jackpot, whose prizes can go well above $100,000!

This medium-to-high variance slot comes with an RTP of 96.5%.

"This visually stunning game is worth checking out, as – apart from its looks – has plenty to offer. Its bonus features will keep players seated for hours, and with a bit of luck can result in fantastic cash prizes."

Play Age of the Gods Epic Troy for Real Here